In my last post, we took a lightning-fast sprint through 500 years of gin history, from juniper-flavoured tonic wines to the development of the London Dry style and discovering how well it mixed with medicinal compounds to make them enjoyable to take. 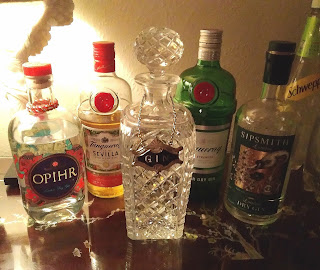 ‘London Dry’ denotes a style of gin, not a geographical origin. It’s a clear spirit that has been distilled with roots, berries and seeds to flavour the spirit. A significant proportion of these flavourings must be juniper. Angelica and coriander are the most common other ingredients. No additional sugar is added. ‘Old Tom’ gin, an older style that is enjoying an increase in popularity, as modern drinkers seek out different experiences, is made with fewer, stronger flavourings and sweetened after distillation.

During the cocktail boom of the early 20th century, London Dry gin became the style of gin to use. Its clean taste and dry finish make it ideal for mixing with other flavours. Well-known cocktails like the White Lady, the Martini and the Negroni all belong to this era, and gin found its way into all sorts of combinations. One or two of these combinations might surprise us. Did you know, for instance, that the original spirit in an Alexander cocktail was gin? It’s quite a startling drink in its original form, nothing like as reassuring as its brandy-based offspring, and worth trying out.
Place ice in a shaker with a measure of cream, a measure of white crème de cacao and a measure of London gin. Shake hard and strain into a goblet. Finish with a little grated dark chocolate.

Fans of the White Lady may be surprised to know that she, too, is a derivative. Before the Lady went pale, she was as pink as they come. Try this Pink Lady recipe:
In a shaker of ice, place a measure of strong gin, a tablespoon of alcoholic grenadine cordial and about a tablespoon of egg white. Shake very vigorously for a minute or so, then strain into a coupe glass.
The resulting drink is slightly sweet, very smooth, and tasting of every one of its juniper berries. 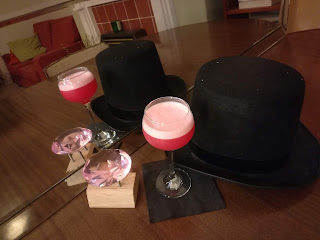 Gin went slowly out of fashion from the 1950s onwards, and by the 1980s seemed to be the preserve of the middle-aged. However, in 1986, International Distillers and Vintners took the bold step of launching a new gin on the market. It’s main selling point was to be the large number of interesting flavourings it used, images of which were etched onto the sides of its unique, pale blue bottle. Drinkers learnt a new word – ‘botanicals.’ Sold at a higher price and alcoholic strength than most others on the market at the time, it immediately positioned itself as a luxury product, a gin for the knowledgeable and discerning. What a stroke of genius! Almost overnight, Bombay Sapphire re-vivified the gin market, and it wasn’t long before other producers were looking to follow its example.

In 2009 the Sipsmith Distillery became the first in over two hundred years to be granted a licence specifically for gin. A few years later, excise regulations were relaxed again, making it easier to obtain a licence for small-scale commercial production of spirits. The outcome of this relaxation, tied to the resurgence in interest in gin as a drink, was an explosion in the number of gins on the market. Small-scale distillers, unable to compete with big brands on price, have marketed their product as local, with strong ties to their home town or city, or as ‘craft,’ focusing on the contribution made by careful producers. In the publicity materials, family stories abound, alongside descriptions of rare botanicals and unique properties of local waters. 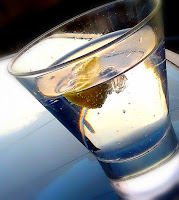 And here we see one of the challenges of the current boom. Local sells, but ‘local’ gins are not always made in the town whose name they bear. Is this a problem? If the gin tastes good, does it matter where it was produced? Well, yes and no. If I’m buying it because it tastes good, that’s all that really matters. However, if I’ve been persuaded to buy because of its connection to a particular town or region, then I’m making a choice to support employment in that area and should be able to have confidence that most of the work done around this gin is done in the area named. Ask before you buy.

Once a drink becomes fashionable, more and more people will want to try it. In the past, if you tried a drink and disliked it, you moved on. With the gin boom, what seems to be happening is that drinks manufacturers will quickly bring out a new gin with flavours you might like. This needn’t be a problem, and the history of gin is one of changing the flavour to make it more palatable. We know that young palates are particularly sensitive to bitterness. It’s the reason children dislike sprouts. We also know that they have a low sensitivity to sweetness, which is why we grow out of our love of candy floss and seaside rock as we get older. However, what gin has always had, what gives it its name, indeed, is the bitter, astringent taste of the juniper berry. There are hundreds of new gins on the market every year, many of which are highly sweetened and flavoured of all kinds of things that mask the juniper. Are these made for people who dislike gin but want to be seen to be drinking it? Do they not have the confidence to drink something they like better if it has a different name?

EU consumer-protection regulations require any product calling itself gin to be above 35.5% ABV and to taste predominantly of juniper. While the first of those conditions can be objectively verified, the second one is really a matter for the individual’s response. I’m sure the bubble in the gin market is going to burst soon. I’m confident that once it does, many of the new gins will survive. London Dry will continue to be the dominant style, but the interest in other styles, such as Old Tom, will continue. Another popular style may emerge, offering a new angle on the taste of juniper. Maybe even one or two of the ‘lollipop gins’ will survive as niche liqueurs. The rest will go the same way as Cherry B, Taboo & coke and Hooch – an indulgent memory of something we wouldn’t dream of ever going back to.