Showing posts from May, 2021
Show All

In Praise of Asparagus 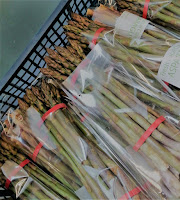 Living close to the wonderful agricultural belt around Knaresborough in North Yorkshire, I find myself getting more and more excited each year as the end of May approaches and the first of the local asparagus starts to appear in the shops. Nothing compares to English asparagus in season. It’s fresh-tasting and fragrant, slightly sweet and a touch astringent at the same time. Its effect on the kidneys is the stuff of mythology and makes a fascinating study in itself, while the shape and sensuality of eating the stems have been said to be aphrodisiac. I shall confine my comments, though, to its taste. The earliest asparagus to appear is the sprue, fine stems that have been thinned out to encourage the plant to grow thicker. It has all the taste of the bigger stems but is sold more cheaply. You won’t find it in the supermarkets, though. It’s considered almost a by-product of the main crop and not worth bagging up. Farmers tend to sell it loose to local markets and greengrocers. Because th
2 comments
Read more 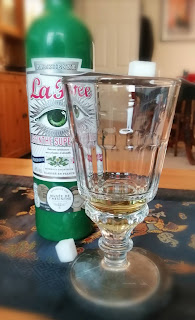 Drinks, like most other things in life, have a cycle of fashions. Cocktails have come and gone several times since their 1920s heyday. When I started buying wines, riesling was the white wine of choice for most drinkers. That was replaced by chardonnay, then pinot grigio, and now it's sauvignon blanc, with a suggestion that riesling might be the next big thing. Some drinks become so fashionable that their popularity can be described as a craze. Think of the current wealth of gins available and the almost insatiable appetite for new gin experiences, new flavours, new mixers. Between the 1860s and 1914, that same crazed appetite was seen in much of Europe in relation to absinthe. Absinthe is a high-alcohol, herb-flavoured spirit (anywhere between 55% and 74% ABV). It is usually green in colour, due to it being subject to a second maceration of herbs after distillation. Three herbs in particular are used to give it its characteristic look and taste: green anis, fennel and wormwood. An
4 comments
Read more 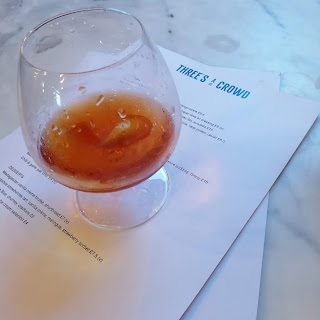 Sazerac - a brandy Old Fashioned with an absinthe twist  I'm a bit of a purist when it comes to cocktails. All mixologists enjoy creating new drinks and playing riffs on the well-known ones, but I get as much enjoyment out of tracing a cocktail back to its origins and serving it as it was first served (as far as possible). There's a lot to be learnt about cocktail-making by learning the classic versions of the recipes. It teaches you how to structure a drink, what effect different methods of mixing have, and the advantages and disadvantages of certain garnishes or glassware. Whenever I visit a new bar, or am introduced to a bartender who describes themself as a cocktail waiter/mixologist, I like to put them to the test a little, by ordering a classic cocktail that isn't on the list, usually a White Lady or a Negroni. If they make it well, I know I'm in good hands. If they look it up, I know they're probably inexperienced but skilled and not full of BS. If they can&#
2 comments
Read more
More posts