Showing posts from November, 2019
Show All

I was asked by my stepson to write about beer, specifically about drinking beer as an aperitif drink, with a few nibbles in the early evening. He asked me to consider what styles of beer might work best in that context, and to make a couple of specific recommendations. Gueuze Boon with pickled herring Image: GP Mather Especially for those coming new to my blog, it's worth reminding ourselves, very briefly, what aperitif culture is. Coming at the end of the working day, and marking its transition to evening, recreation and dining, the aperitif is a social drink with friends and a few light snacks. The word comes from a Latin root that means "an opening," and the drink is a way of opening up the appetite for dinner. The first thing I did was check to see what had been written before on the subject. Surprisingly little, as it turns out: even the magisterial Pete Brown ( https://www.petebrown.net/ ) hasn't used the word in his blog since 2011. If the beer intern
Post a comment
Read more 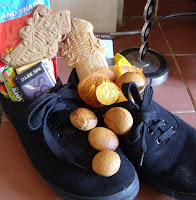 How St Nicholas became our modern Santa Claus is fairly well known but worth revisiting very briefly. German immigration into the northern USA brought tales of the generous saint, leaving gifts of sweets and other treats in the shoes of good children on the morning of his feast (6th December). In time, these tales were conflated with the English figure of Father Christmas, dressed in green and crowned with holly, ruling over the festivities of the Christmas season. His bishop's mitre has over time been replaced with a hood and his white vestments traded for festive red, some say as a marketing tool for a certain American drinks manufacturer. The association between St Nicholas and children is particularly strong in the area of west-central Europe that became Lotharingia when the Carolingian Empire was divided in 855. The area stretched from Flanders and Holland in the north to Lorraine in the south. Although the peoples that lived in this territory lacked any kind of linguisti
1 comment
Read more

Yes, I've used the 'C' word, and it's not even half way through November! Baking, though, won't wait. Christmas inevitably involves a lot of hospitality for us, so early preparation is key if I'm going to enjoy the festivities. Many of my favourite recipes have been handed from one friend to another, one generation to the next and are recorded on old envelopes and bits of paper stuffed into the back of an old cookbook. I love the stories and memories that go with them and I'm making a point of collecting them into a book to give to my next generation when they're old enough. They may have to get used to my habit of swinging from metric to imperial measures and back again, though. I'm of that age group who were taught using both, and, although I'm equally comfortable with each, I struggle to convert from one to the other. I just use the version I've been given. A Boxing Day buffet, with cake, sausage rolls and mince pies Cakes
Post a comment
Read more

Falling in love again - a weekend in Nice 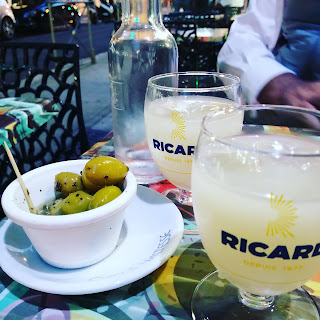 This time last year, I wrote about living in France as a young man and discovering aperitif culture. ( http://blog.theaperitifguy.co.uk/2018/10/doing-it-la-francaise.html ) I wrote how it was something very different from what I was used to at home and that I have tried to make the aperitif pause before dinner a feature of my own life. In the last few years, I've travelled more regularly in Italy and other countries. I've had a couple of short breaks in Paris, but that's all. With those breaks being so short, I've spoken very little French and not taken time to find really good restaurants, the way I have in other countries. For much of that same time, it would be also fair to say that French cuisine has taken a break from leading the world. The really exciting restaurants have been over the Pyrenees, in Catalunya and Basque Spain. Restaurants in Scandinavia have been getting better and better, too, delivering exciting flavours by using traditional techniques of
Post a comment
Read more
More posts