Have you ever wondered about the influences that create our culinary culture and styles of dining? I have been creating dinners for the last few years that explore these influences – the places, the people and the moments that have made us who we are as diners and hosts. Since these dinners bring together all the attitudes and skills I've been blogging about (using aperitifs to create a sense of expectation, planning a menu, setting out a stunning visual scene...), a reader has asked me to give an account of some of these dinners and why I think these people, places and times matter.

One of the more colourful dinners we gave explored the social scene of the mid-1930s. In order to create a menu and a social atmosphere that made sense, I tried to imagine what kind of dinner would have been given by the people who lived at my address in 1936. Let's consider who those people were and how their world looked...

For a generation who had survived the horrors of the Great War, the 1919 influenza epidemic and the dark days of economic depression, life in the thirties meant hard work, responsibility and serious political effort, to ensure there was no repeat of those calamities. However, the generation too young to have fully understood those realities saw things very differently. For them, life was too short not to live a little. They had reached majority just as the economy was picking up; transatlantic shipping was fast and luxurious; advances in technology had made life much easier than it had been for their parents.

But it was all about to end and – deep down – they knew it.


Hitler had come to power in 1933 and was already flexing his muscles. Germany was re-arming and in March 1936 had re-occupied the Rhineland, in violation of the Treaty of Versailles. Voices in Westminster debated the best way to deal with this growing threat. In May, Italy annexed Ethiopia, and in July, the army rose against the elected government in Spain, triggering civil war.

I suspect that it was the looming threat of war that, partly at least, drove the giddy hedonism of the mid-thirties. If you were young and rich, perhaps you felt you might as well be prodigal with it: you could be dead very soon, like so many of the previous generation. Cocktails, Champagne, gambling, motor racing, sex and cocaine: they tried it all!

For Britain, the tensions played out most vividly in the Royal family. On the one hand was Edward VIII, king since his father’s death in January: young, fun-loving and hugely popular (and not unsympathetic to Hitler). On the other were Queen Mary and the Dukes of York and Kent: stable, serious and dutiful, and powerfully supported within the Church and government. As we all know, it was this latter group who won out in the end, but that was not always a given, and the country lived with the crisis from King George’s death in January to the abdication in December.

The arts searched for colour and modernity and every opportunity to shock or surprise. The first reliable synthetic dyes had come into use at the end of the twenties, setting off an explosion of colour in textiles, which spread like falling dominoes through the fields of jewellery, interior design and ceramics (viz. Cartier, Rolf Engströmer and Clarice Cliff). Straight lines, symmetry and smooth curves replaced the crazy, organic sinuousness of the previous fashion. In the theatre and concert hall, the bankruptcy of the Ballets Russes in 1929 had scattered a generation of composers, designers and choreographers (such as Stravinsky, Ravel, Marie Rambert, George Ballanchine...) across the world. On the table, dishes were chosen for their colour (often heightened with a splash or two of something – not always safe - from a little bottle). Stripes and layers were the order of the day, and, with British interests booming in Argentina and other parts of Latin America, red hot chilli was the new black! 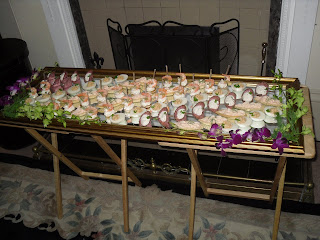 For our 1930s dinner, then, we started with a cocktail party, hosted by a friend. Geometric rows of colourful canapés were set out on a mirrored table: devilled eggs, barquettes of salmon mousse, soufléed cheese toasts, salami cones and prawn croustades. Two Champagne-based cocktails were offered. Although neither dates back to the 30s, they both fit the mood of frivolity and colour. A Dream cocktail is made with a mixture of Dubonnet, Cointreau and grapefuit juice, topped up with Champagne. A Saint Esprit mixes Grand Marnier and St Germain liqueurs before adding the Champagne. 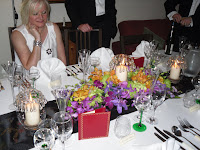 When guests arrived at my home from the cocktail party, they were greeted with a table awash with colour. Laid on a Chinese silk runner were crystal lamps, masses of dendrobium orchids in every colour and napkins folded as fans, to reflect the "suburst" design beloved of Art Deco styling. It was important to me that the food should look stunning, and colour was central to that. My starter was a fresh, green pea and chervil soup, finished with soured cream and served with a smoked ham and mustard palmier.

Next was a lobster cocktail. On a trip to a discount store a few weeks earlier, we had found a set of starfish-shaped plates in opalescent glass. These made the perfect base on which to sit a Windsor martini glass, which we loaded with shredded lettuce, cress and lobster claw meat. The mayonnaise was enriched with a lobster essence that I had made from the shells: a basic bisque that was then reduced from a few litres to about 100ml. Finally, the tails were laid on top in alternating slices with black truffle. Several years later, this dish is still spoken of in glowing terms by those who were there. I'm very proud of it. 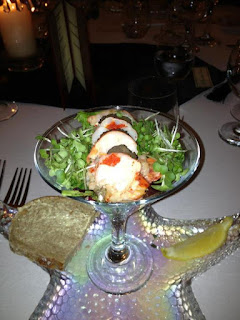 We followed the fish with a little palate-cleanser: ginger sorbet, to which guests were invited to add a splash of Seville orange gin. Each glass came with a glass swizzle-stick topped with a coloured fish or bird, which guests were given to take home as a keepsake.

Our main course reflected the fact we live in a region with good hunting. A roast loin of venison was served with redcurrant gravy. The vegetables were layered and set into a terrine tricolore, and pommes marquise (mashed potato, piped into baskets and filled with finely chopped tomato flesh) brought yet more colour to the plates.

A dinner like this is a long night, and it's important that portion sizes reflect the number of courses. It's a fine balance to provide generously without over-facing guests. The pauses between courses allow diners to digest a leisurely pace, but they also provide important moments for the hard-working cook to rest and converse with his guests. I'm fortunate that my partner is an excellent social host who can animate and enliven any table, while I vanish back to the kitchen to give the next course its final flourish. In keeping with the mid-30s sense of fun and manic hilarity, he organised a series of parlour games for our guests to play at the table between courses.

After cheeses and a bombe of pistacchio ice cream with maraschino mousse (served with more Champagne), we repared outside, where another cocktail bar had been laid out, decorated out with gaily-coloured paper lanterns and fairy lights. Here, we served strong, digestive cocktails: brandy Alexander and Mary Pickford. A brandy Alexander is made with cream, crème de cacao and Cognac. A Mary Pickford is a deceptively powerful mix of white rum, pineapple juice, grenadine cordial and marachino liqueur.