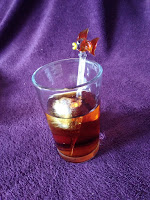 Part of me wanted to title this entry “rescuing vermouth.” It does have a bit of an old-fashioned reputation, you see. For so many of us, vermouth means your auntie’s bianco & lemonade, back in the nineteen-eighties, or a glass of Cinzano down the front of Joan Collins’s blouse in the TV ad. It’s such a shame. Great vermouth makes a perfect aperitif drink

The slight bitterness of vermouth, as well as the name, originally came from the wormwood plant, but the name now denotes a wine-based drink in which various herbs and other plant extracts are blended with spirit and a quantity of sugar. Traditionally, all vermouth was made with white wine: red vermouth is sweetened with caramel. One or two modern vermouths buck this trend with rosé and red wines, but tradition still holds sway over the majority of products.

For me, there are just two ways to use vermouth: on its own or in a cocktail. Vermouth with a mixer just doesn’t do it for me, especially one as sweet as lemonade. The most famous vermouth cocktail is, of course, the martini. That greatest of all cocktails deserves a post all to itself, so look out for my reflections on how to get it right in a few weeks’ time. When I’m drinking neat, I generally prefer red, served simply with ice and a slice of orange.  My current favourite is Antica Formula, a rich, deep red vermouth with plenty flavour and a hint of caramel on the nose. My wine merchant encourages me to try Scarpa, and has pointed out a new, English vermouth made by Gusbourne, best known for their sparkling wines. 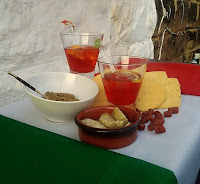 An experiment:
I have found that, even mixed into a cocktail, it’s always worth paying for a good vermouth. Following my last post about Negroni, the Beloved and I tried a little experiment. I mixed two Negronis, one with Martini rosso and the other with Cocchi storico. They were made in identical glasses and garnished with the two halves of the same slice of orange. Only the stirrers were different, so that only I could tell them apart. The Beloved was asked to taste and comment. He liked both but firmly preferred the one made with Cocchi. The one with Martini seemed, he said, a bit harsher.

Vermouth is such a versatile drink that you can serve almost anything with it. I’d tend towards saltier foods with dry vermouth and martinis. Try creamier, slightly fatty foods with red vermouth. Waitrose, our local high-end supermarket, sells ready-boiled quail eggs with a little sachet of celery salt: they’re hard to beat, but I could be tempted to serve chicken liver parfait on crostini, too. Nice, plump, green olives will go well with any vermouth. 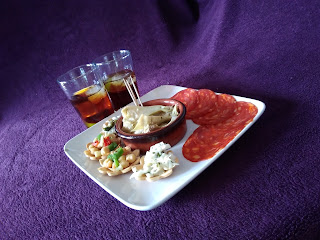 I’ll return to red vermouth in a later post and look at the aperitif culture of Catalunya in eastern Spain. Next time, though, we’ll look at autumn fruits in our aperitif drinks.
aperitif Negroni vermouth