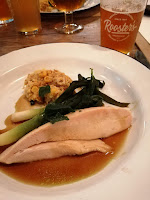 We've been drinking beer with food for centuries, but it's only in the last couple of decades that people have begun to give serious thought to matching food with beer. In the English-speaking world, especially, beer used to be seen as a working man's drink, and therefore unworthy of respectful consideration; wine was the drink of sophisticates. Working men were not expected to have discerning palates and an interest in what makes food taste good. As wine has become more popular, though, so too has to wine-drinkers' interest in food matching. I wouldn't have a blog if that cultural shift hadn't happened. Regardless of cultural class, these days there can be few drinkers unfamiliar with the idea of serving certain drinks with certain foods to enhance the appreciation of both. With the growth of interest in craft ales and micro-brewing, beer, too, has positioned itself as a drink for discerning and sophisticated drinkers, and sophisticated drinkers like to dine well. The interest in food and beer matching is as inevitable as it is welcome. 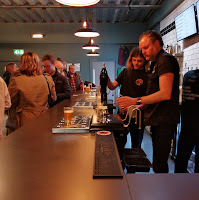 Last week, I attended an event at the Rooster's brewery in Harrogate. It was billed as a launch event for their "Outlaw" sub-brand of limited-edition, experimental brews, but turned to be so much more. Rooster's has recently moved into larger premises with an on-site taproom. The event was partly a celebration of that move, and the first major event in the taproom. The Harewood Food and Drink Project were invited to prepare a six-course tasting menu to match the six Outlaw beers we'd be tasting. To complete this multi-layered event, beer writers Melissa Cole and Pete Brown would be on hand to guide us through the tastes, aromas and textures of the evening. 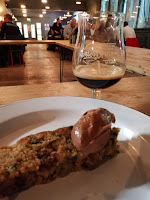 Our tasting menu of fine foods ranged from a venison bon-bon with orange ketchup, which was matched with an orange-flavoured pale ale, to a deliciously moist cake made from Jerusalem artichokes and accompanied by a deep, sweet stout. Melissa's interventions drew attention to each beer's qualities as a match for the dish. We were directed to consider maltiness, hop bitterness, aroma and sourness, as well as the texture/mouthfeel, clarity and body of each beer. Her suggestions included balancing spice with maltiness and fat with bitterness. Complimentary matches included pairing the lime and chilli in a berliner weisse with ceviche and picking up the sweetness of carrots with the malt in a New England IPA. For me, the outstanding pairing of the evening was the artichoke cake and chocolate mousse with a pastry stout. I'm not a big fan of sweet beers on their own, but paired with the moist cake and smooth chocolate, this dark, fruity, toasted beer seemed to have found its natural home. Be on alert, my future guests - this combination is coming to a table near you very soon! 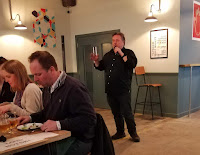 We had been promised "a carefully curated soundtrack" by Pete Brown. Pete introduced his subject somewhat tongue-in-cheek as an exercise in beer and music matching. What he actually did was, through music, demonstrate how flavour is a multi-dimensional experience. We explored how social context, memory, taste, smell, texture and sound all play their part in our experience of flavour. We discovered that certain taste experiences can be high-pitched or low-pitched, harmonic or atonal. The stout-and-chocolate combination will be enhanced by the smooth voice of Ella Fitzgerald, but it might be better to play more discordant music if we wanted to bring out the sourness of a Belgian lambic beer. Without becoming too technical, Pete explained some of the neuroscience behind his beer-and-music choices, playing us songs to enhance each of the Outlaw beers. This fascinating presentation (or, rather, this series of mini-presentations) reinforced and showed the scientific evidence for what we all know about great hospitality and entertaining - that the best evenings are those that we've thought about on every level: the lighting of the dining room, the music choices, the layout of the table, flowers, candlelight, drinks choices and food. 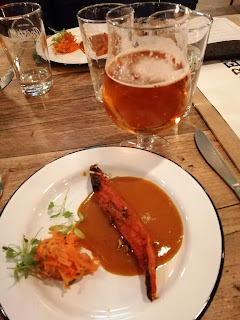 Back to beer, then, and its relationship to food. Something I got out of it was the confidence to bring beer to my table more often in future. We were given a wheat beer to accompany one of the dishes on Tommy Bank's tasting menu at The Black Swan at Oldstead, and it was a delightful match. I had imagined, though, that getting such matches right involved Michelin-levels of expertise in cooking and a friendly brewer who can create bespoke brews for your dishes. My experience at Rooster's has shown that it requires no more or less thought than pairing foods with wine, just the same commitment to sampling widely and experimenting with pairings.

Taste and flavour are very personal experiences, and there are no "rules" for pairing beers with food. However, the following principles might serve as guidelines for experimentation:

Links
I'm happy to recommend the following for further reading:

http://www.melissacolebeer.com/ - Melissa Cole's website, which includes information about her books on beer and food.

https://www.petebrown.net/2013/08/06/flavour-theres-lot-more-to-it-than/ - Thoughts from Pete Brown on the science of flavour.

https://www.harewoodfoodanddrink.com/about - Information about the Harewood Food & Drink Project, who created the six dishes we ate at Rooster's.


Next time: teaching myself how to make a dodine de canard