About fifteen years ago, the Beloved and I visited Venice on holiday. Every guidebook recommended we try the local aperitif drink. In Venice at the time, spritz was made with still wine and a little soda and flavoured with one of several bitter liquors. Our guidebook noted that, while Campari was generally the preferred flavouring south of the Grand Canal, most bars in the tourist north served spritz with Aperol, then virtually unknown at home. Perhaps the students and celebs on the south islands like the higher alcohol content of Campari! It was served in a straight-sided glass (usually a high-ball), filled with ice, fruit and olives.

How times have changed!

I've just done a quick Google image search, my search-term being simply "spritz." Most of the images show bright orange Aperol spritz in large wine glasses, although there are some old fashioned glasses. Orange slices are frequent, and there are a couple of raspberries and blueberries to be seen, but there is not a single olive in any of the images. The olives creep in when I add "Venice" to my search term, as do bottles of Select Aperitivo and Campari. This isn't a very scientific survey, I admit, but Google probably has more influence on people's drinking habits than any science does. 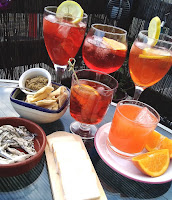 The highly influential International Bartenders Association (IBA) defines the Spritz Veneziano as being made with 6cl Prosecco, 4cl of Aperol and a splash of soda. I never had it with Prosecco on that visit years ago, but the IBA does have form for defining drinks how they're made in the USA, rather than how they're made in their region of origin. I think we've all become used to the generally accepted combo of 3 measures of Prosecco, 2 measures of Aperol and 1 of soda, and I expect that's how it's made in Venice these days. Most frequently, you'll see the first two ingredients mixed together with a spoon, which knocks out some of the effervescence. The soda replaces that fizz on the last minute. Visiting Bologna a couple of years ago, I had a revelation: spritz tastes much better if you replace the soda with a splash more Prosecco. It serves the same purpose - to replace the fizz lost by stirring - but mixes more easily with the rest of the drink than water does. 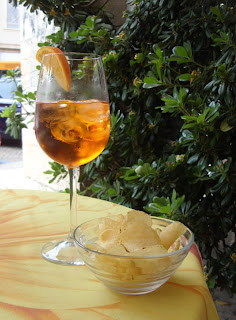 The Aperol spritz has become synonymous with the early evening aperitivo throughout most of northern Italy, but there is still room for variation. In Bologna, we found a small bar in a shopping arcade selling nothing but spritz. I think I counted a dozen versions. Every one was made with Prosecco and no soda, and each was garnished with fruits and olives to suit its key ingredient. As we've come to expect in Italy, we were furnished with a small plate and invited to help ourselves to crisps (potato chips), pretzels, peanuts and other salted snacks from bowls on the bar. I love to ring the changes with my aperitivi and to offer my guests something they might not have tried before, so the ideas from this tiny Bologna bar have been inspirational. 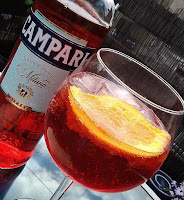 Spritz con Bitters
Sit back and imagine you're a student or a neighbour of Elton & David near the Accademia!
60ml still white wine or Prosecco
40ml Campari
Ice
Stir well to mix, add a little soda water or more Prosecco and garnish with green olives and a slice of orange. 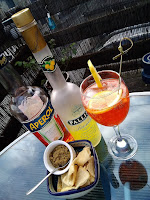 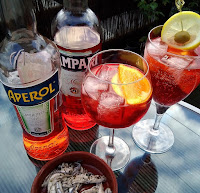 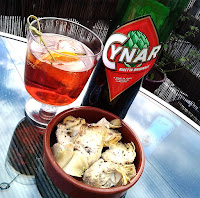 
Next Time: Restaurant aperitif experiences, excellent and less so