June 09, 2019
As I write this, the ever-reliable English weather has just released another shower of rain. The week has been a mix of warm sunshine and cold, wind-driven rain, alternating rapidly. Summer is so often short-lived in Britain that the Beloved and I try to make the most of it when it comes. One of the our  pleasures is to sit outside with an evening aperitif, listening to the screaming of swifts, and blackbirds singing on the chimney pots. 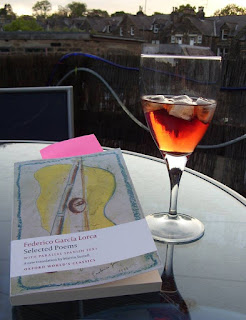 Although I love a gin & tonic or a spritz as much as anyone, when I'm having a quiet moment in the evening sun, my aperitif of choice is an aromatised wine that doesn't even have a real name. I suppose it's the successor to the medieval hypocras or a very simple vermouth. It's made from rosé wine and orange peel and tastes not unlike marmalade. I found the recipe in Jeanne Strang's wonderful Goose Fat and Garlic, a book of recipes and remembrances from the west of France. I've made this lovely drink for a number of years now, and the making of it reminds me that summer is coming. It's very easy and delicious. 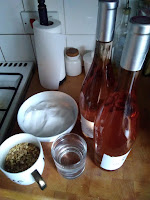 Apéritif aux Bigarades
In a clean bowl, pan or other large container, pour
Cover and leave to macerate for 2-3 days, then strain through fine muslin and bottle. The resulting liquor looks, smells and tastes like sunshine in a bottle and can be enjoyed immediately, served over ice.

You can buy dried orange peel in some specialist shops or online from Steenbergs (https://steenbergs.co.uk/organic-orange-peel-dried-standard-45g-ora002 ). The Steenbergs' peel is quite fine, and you might want to strain your wine through a jelly bag to make sure it's as clear as possible.


Making aperitifs at home is quite a tradition in rural France, just as many households in Britain and Ireland will make sloe gin in the autumn. Indeed the sloe finds its way into one of the best-known of France's regional aperitifs, la Troussepinette. This typical drink of the Vendée is just as easy as the previous recipe and based on the same principal of macerating wine and spirit with sugar and a flavouring ingredient. Make it in the autumn for drinking the following summer.

La Troussepinette
In a clean glass jar or similar, place

Agitate daily for a week, then strain and bottle. Toussepinette benefits from a couple of months in the bottle before drinking and should be served chilled.

In towns all over Britain, you'll find walnut trees in the municipal parks and gardens. It's said they were planted during the Second World War to provide for the munitions factories. While the scent of a rubbed walnut leaf is reminiscent of cordite, I can find no information to back up the claim. Perhaps it's still classified as an official secret! Walnut leaves are used to flavour another of my favourite home-made aperitif wines from France, also from Jeanne Strang's book. 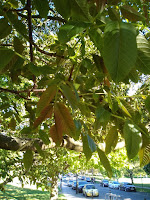 Pick the leaves early in the summer, when they still have a slight blush to them. Put the leaves and spirit in a closed jar for two weeks.
Dissolve the sugar in the wine and strain the flavoured spirit into it. Discard the leaves.
Bottle the resulting liquor and leave for several weeks before drinking.

The wine tastes remarkably fresh and benefits from being served slightly chilled. Its taste is reminiscent of port or Banyuls. This is one to sip indoors, as you watch a late-summer storm from the safety of your armchair. 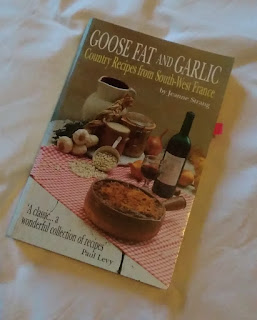