August 06, 2019
Over the years, I've visited a few whisky distilleries. The highlands and islands of Scotland, in particular, are home to many distilleries, set in beautiful surroundings, which have seen commercial advantages to receiving visitors. Until this year, I hadn't been inside a gin distillery, though, and I thought it about time I rectified that. (Pardon the pun.)

As luck would have it, I discovered the Lakes Distillery, through their exceptionally clean-tasting gin. Then I discovered that they are open to tourists and even have a bistro on site. Perfect. We booked ourselves in for a distillery tour - and lunch in the Bistro - on the way home from a weekend away. We were blessed with a quiet day and the wisdom to book a morning tour. Not only did this provide us with an ideal aperitif before lunch, it meant we had the tour guide to ourselves. We could ask trivial questions, probing questions, follow tangents and cause our guide a giggle, all without worrying about how it came across to others. 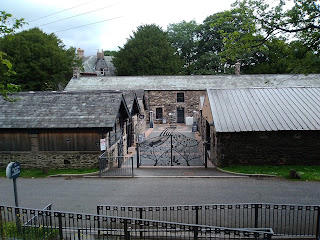 One of the first things we learned was that the Lakes Distillery sees itself first and foremost as a whisky distillery. The biggest problem with starting out in whisky-making, though, is that the law does not allow a spirit to be sold as whisky until it's been aged in wooden casks for at least three years. That's three years of expensive production and maturing before you can recoup a single penny. The reality is that most whiskies are aged at least eight years, and some as much as twice that. Almost all whiskies are blended: single malts are blended from a variety of aged spirits from a single distillery, so a good single malt whisky depends on many years of production to establish a consistent taste. Are you getting the picture? You won't make a lot of money out of whisky while your business is young.

One of the things I found most fascinating is how the Lakes Distillery has dealt with this problem.

First, they make gin and vodka. When you go inside the still room at the Lakes Distillery, the first things you see are the two whisky stills, but behind them, in a corner is a smaller, slimmer still for making vodka and gin. (Gin being a juniper-flavoured vodka.) These are spirits that can be sold as soon as they come off the still, thus providing an income for the distillery while its whisky is young. That's not to say these spirits are treated as unimportant. Both are delicious, showing as much care in the production as any whisky I've tasted. The still used at the Lakes has an additional collar at the top of the column, so that more spirit drops back into the still during the distillation process, giving an exceptionally pure and smooth experience for the drinker. It's no wonder the vodka was named this year as the world's best (World Vodka Awards, February 2019). 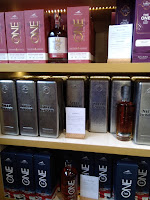 Secondly, they buy in, mature and blend spirits from other distilleries to sell as The One, British blended whisky. I found this particularly creative. The master whisky-maker at the Lakes Distillery has made a decision not to follow the traditional approach to blending whisky. Usually, spirits are aged separately in numbered vats. When they come to be bottled (or moved to smaller butts for secondary aging), the different years are blended together in a way that keeps the flavour consistent over time. At the Lakes, they have decided to use the method the French use for cognac. In this method, barrels of spirit are constantly monitored for the development of flavour, and blending happens at each stage, as the master maker considers necessary. By buying in, blending and aging whiskies now, the Lakes Distillery has a product it can sell and an example of the style it will aim at in its home-produced whisky over time. Utter brilliance!

Last year, the first home-produced whisky was bottled at the Lakes. Obviously, given all I've said about blending whisky from different years, much of the three year old spirit has been held back. Thus, a bottle of "Genesis" Lakes Distillery whisky is still very rare and sells for well over £800. 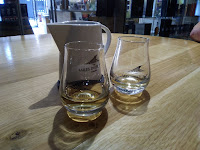 No distillery tour is complete without a tasting, and we were given gin, vodka and blended whisky to taste. To my taste, the gin works well with a fairly neutral tonic, to show off its clean, sharp, juniper-led punch. It also makes a fantastic Martini, and would work well in any citrus cocktail. The vodka is simply too good for most cocktails. Drink it neat, from the freezer, and never mix it with tomatoes and spices! If you want to mix it, use it where its smoothness will count. I created a cocktail with it for Zoe Williams of the Guardian a couple of months back, where it was mixed with Italicus liqueur, lemon juice and Prosecco. In such delicate company, a clean, smooth vodka is important, one that will slip, almost unnoticed, to the back of your mouth, then give you a hot-and-cold kick on the way down.

The One whisky is not a heavy one, with only a subtle hint of peat smoke. More noticeable are the elements of spice and hazelnut and a touch of caramel on the palate. While it's not entirely to my taste (I like the big flavours of an Islay whisky), it suited the Beloved perfectly, and would be an ideal whisky to have in, to suite a wide range of tastes. The makers recommend drinking it neat, but it would be lovely mixed with a little ginger ale, too.

I could carry on writing about the visit forever! I haven't even mentioned the beauty of the surroundings, the lovely food in the bistro, the low-waste policies or the alpacas yet. To sum up in three words: visit for yourself. You'll be glad you did.

For those who might like to try it, here's the cocktail I created for Zoe Williams:
A Mermaid's Kiss
Moisten half the rim of two coupe glasses with Italicus 'Rosolio di Bergamotto' liqueur, shake off the excess, then dip into a mixture of sugar and sea salt.

In a mixing glass of ice, stir
25ml of The Lakes Distillery vodka
50ml of Italicus liqueur
a tablespoon of fresh lemon juice.

Strain into the prepared glasses, so that each is half full, and add a splash of Prosecco.

Next time: the final part in my summer series about menu planning, this time looking at how to get the best out of a traditional sequence of three or four courses.