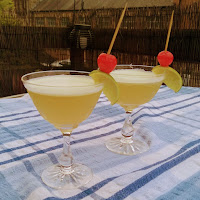 We often think of the 1920s as the heyday of cocktail drinking. This is partly because the prohibition of the manufacture, sale and possession of alcohol in the USA, from 1917 to 1933, drove many wealthy Americans to seek refreshment in the hotels and restaurants of the European capitals. The strength of mixed drinks, and their endless variations of flavour and colour, seemed to fit with the mood of cities rediscovering joy after the horrors of the Great War. The leisured classes relished the fun and frivolity of cocktails and could afford to patronise bars that employed expert cocktail waiters, who were starting to be feted as celebrities.

That's not where cocktails began, though. The earliest known evidence of the word being used to refer to alcohol comes from the Balance and Columbian Repository, a New York newspaper, when the editor answered the question "What is a cocktail?" thus:
"Cock-tail is a stimulating liquor, composed of spirits of any kind, sugar, water, and bitters"
Fifty or so years later, we find this same combination described as spirit "served in the old fashioned way." By the 1880s, bar books were able to confidently describe such drinks as an Old Fashioned cocktail.  Originally made with Dutch jenever, later Cognac and eventually the more local Bourbon and rye whiskies, it's still one of the basic drinks a good bartender needs to learn.


Old Fashioned
In a heavy-bottomed glass, muddle together a cube of unrefined sugar, a few dashes of Angostura bitters and a teaspoon of water. Add ice and a measure of Bourbon or rye. Squeeze a piece of orange peel over the drink to spray it with orange oil and drop the peel into the glass.

When you watch an Old Fashioned being made, you can see in it the origin of many popular cocktails. It doesn't take much imagination to add lemon juice and a splash of soda and - voilà! - a whiskey sour. Add red vermouth and a dash of maraschino and you have a Manhattan. Once you've got as far as the Manhattan, you can imagine switching the spirit base for gin and making pink gin, gin & It, Zaza (gin & Dubonnet) and even the mighty Martini. All have their roots in the Old Fashioned.

Currently, my favourite Old Fashioned variant is the Sazerac. The cocktail is the very essence of New Orleans and takes its name from a bar in that city named after a brand of imported Cognac. It can be made with brandy, Bourbon or rye, a mixture of two of them or all three. I personally prefer Cognac, acknowledging the French heritage of the cocktail and region of its birth. It's not for the faint-hearted but rewards the courage of those who try it. You'll get a better result if you chill the glass in the freezer for 5-10 minutes before you start.

Not all cocktails were heavy on the spirit, and one surprisingly early drink was made with sherry and fruit juice. The sherry cobbler might fel like a drink from the 1960s or 70s but it is old enough to be mentioned in Dickens' Martin Chuzzlewit. The title-character is delighted by the novelty of sipping one through a straw, and drinks historians have suggested that the paper straw was invented for this drink. It's refreshing enough to be served on a warm evening but comforting for autumn drinking, too. Generally made with citrus fruit juice, I've also had it with pineapple, apple or pear juice. One most delicious variant was the one we had at the Black Swan at Oldstead, where it was made with a fine Amontillado sherry and pressed crab-apple juice. Here's my apple flavoured one.


Next time: delicious flavours for autumn.