Yes, I've used the 'C' word, and it's not even half way through November! Baking, though, won't wait. Christmas inevitably involves a lot of hospitality for us, so early preparation is key if I'm going to enjoy the festivities.

Many of my favourite recipes have been handed from one friend to another, one generation to the next and are recorded on old envelopes and bits of paper stuffed into the back of an old cookbook. I love the stories and memories that go with them and I'm making a point of collecting them into a book to give to my next generation when they're old enough. They may have to get used to my habit of swinging from metric to imperial measures and back again, though. I'm of that age group who were taught using both, and, although I'm equally comfortable with each, I struggle to convert from one to the other. I just use the version I've been given. 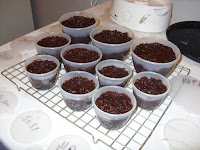 I always make my own puddings. Once you've had a home-made one, you'll never buy a mass-produced one again, and you'll never imagine them to be heavy, either. Christmas puddings are heavy when they're made under pressure and can't rise properly, which is why your shop-bought one - cooked in a sealed bowl, in an industrial-sized pressure cooker, then rapidly cooled to make room for another few thousand - feels like a lead brick on your stomach. Because a pudding needs to steam for several hours, it isn't particularly economical to make just one, so I've bought a big steamer that will hold 9 puddings of differing sizes and make for all the family. You can read my Christmas pudding recipe in my recent article for The Yorkshire Times: https://yorkshiretimes.co.uk/lifestyle#Christmas-Pudding


Now is a good time to make Christmas cakes. I often end up making two, to cater for different tastes among those closest to me. My Mum is a fan of bold, rich flavours and makes a traditional rich fruitcake that is deep and as dark as coaltar. The Beloved, on the other hand, prefers lighter flavours. For him, I have adapted a recipe I found online some years ago. It has the warmth of ginger and a little nip of whisky. Both cakes require soaking the fruit for a few days before you start. This is an important step, as it softens the dried fruit and helps keep the finished cake moist. 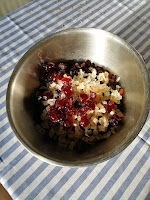 Mix the fruit and alcohol together in a bowl. Cover and leave to soak for up to a week, stirring each day.

6oz butter
6oz dark Muscovado sugar
4 eggs, beaten together
4oz self-raising flour
4oz plain flour
a pinch of salt
1/2 teaspoon ground mixed spice
1oz ground almonds
1oz chopped mixed nuts
1 tablespoon black treacle
Preheat the oven to gas #5, 190C
Cream together the butter and sugar. Carefully beat the egg in a little at a time. You may need to alternate with a little four towards the end. Sift in the flours, salt and spices and fold into the mixture. Fold in the almonds, nuts, treacle and soaked fruit.

Grease and line a suitable cake tin and tip the mix in, flattening the top as you do. Tie a double layer of brown paper around the sides of the tin. This helps to ensure it bakes evenly, without burning at the edges. Bake for one hour, then turn the oven down to #2 (150C) and cook for another 90 minutes. At this point, check the cake with a skewer. If there is any mixture clinging to the skewer, return the cake to the oven for another 30 minutes. You may need to cover the top of the cake with foil to stop the surface burning.

When the cake is cooked, take it out of the oven and leave it to cool in the tin. Prick the surface with a cocktail stick and sprinkle the cake with brandy or rum while it is still slightly warm. Once it's completely cold, take it out of the tin and wrap it in greaseproof paper and foil and store it in a cool, dry place until Christmas.  My Mum used to to create beautiful royal-iced cakes. I'm not particularly artistic and struggle to ice a cake well, so I brush mine with a little egg white and cover it with gold leaf. 4 sheets will cover the top of a 7" square cake. 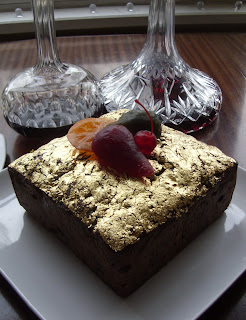 A whisky mac cake for the Beloved (also makes a 7" square cake or 8" round)
Don't use a powerfully flavoured whisky for this. Any good blend will do. By contrast, it benefits from a ginger wine with a bit of fire. For this reason, I like to use Crabbies.

300g raisins
150g sultanas (go for golden ones if you can, for the light colour)
150g currants
200ml ginger wine
50ml whisky
Mix the fruit and alcohol together in a bowl. Cover and leave to soak for up to a week, stirring each day.

Preheat the oven to gas #3, 160C
Cream the butter and sugar. Carefully beat in the egg a little at a time, alternating with a little sifted four. Sift in the remaining flour with the spices and fold into the mixture. Add the almonds, stem ginger and soaked fruit and fold together. Tip the mixture into a greased, lined cake tin, flattening the top. Bake for 90 minutes then check with a skewer. Bake a little longer if required.

When cooked, remove the cake from the oven and cool in the tin. Prick the surface and sprinkle with a little whisky while it's still just warm. Once it's cold, wrap it in clean greaseproof paper and foil and keep until Christmas. As with the other cake, it will benefit from a second and third sprinkling of spirit, but don't overdo it: a wet cake will not cut.

Fill your freezer
You never know when you're going to have visitors over Christmas, so I like to get the freezer well stocked at this time of year. I'm looking for things that can be cooked from frozen if we need to. Both sausage rolls and mince pies are good stand-bys, and I'll usually prepare a couple of batches of each, freeze them and have them in bags, ready for a quick tea or supper when guests arrive unannounced.

I find shortcrust pastry a little too dry for mince pies. Many shops address this with sweet pastry, or with frangipane or streusel toppings. The preferred solution in my family is a short, flaky pastry that we've always referred to as 'Hungarian' pastry. It rolls very thin and is the perfect foil for mincemeat. The recipe came from one of my Mum's old work colleagues, Joan. When she left work, she became a Blackpool landlady and was given the recipe by an Hungarian guest, hence the name, but I've no idea if it is genuinely from Hungary. I'd be interested in hearing from someone who knows.

Rub the butter and four together as best you can. The proportion of butter to four is so high that it'll never get to the 'breadcrumb' stage you'd normally look for. Mix the milk, rum and egg together with a fork and use this liquid to bind the four and butter mix. Kneed very lightly to obtain a smooth dough, then wrap in cling film or foil and leave to rest in the fridge for about half an hour.

This pastry is so short that it will stick to most surfaces, including the rolling-pin. However, by rolling it between two sheets of silicone paper or lightly floured cling film, you can get it to roll very thin. It's best to use fairly shallow cases with this pastry, as it won't support a lot of weight. However, the resulting mince pies are light and delicious and do literally melt in your mouth.