November 25, 2019
I was asked by my stepson to write about beer, specifically about drinking beer as an aperitif drink, with a few nibbles in the early evening. He asked me to consider what styles of beer might work best in that context, and to make a couple of specific recommendations.

Especially for those coming new to my blog, it's worth reminding ourselves, very briefly, what aperitif culture is. Coming at the end of the working day, and marking its transition to evening, recreation and dining, the aperitif is a social drink with friends and a few light snacks. The word comes from a Latin root that means "an opening," and the drink is a way of opening up the appetite for dinner.

The first thing I did was check to see what had been written before on the subject. Surprisingly little, as it turns out: even the magisterial Pete Brown (https://www.petebrown.net/) hasn't used the word in his blog since 2011. If the beer internet was not going to help, I decided I needed to consult more generally, to identify those features of a beer that might make it particularly suitable for aperitif drinking, and then review a few examples that demonstrate the identified qualities. My local wine merchant is my usual go-to person when I want to bounce ideas around, and he does sell a small selection of beers ( and he drinks more extensively than he sells), so I started there.

Mindful of the aperitif's position as the curtain-raiser to dinner, we agreed the beers we were looking for must not be too heavy. The last thing you want from an aperitif is for it to fill you up! For the same reason, anything too gassy was ruled out. We then looked at the kinds of flavour common to aperitif drinks. Many of them are bitter - that's not a problem in beer - but bitter-sweet, rather than just bitter. Another common taste is sour. That's a bit more unusual in beers, but not unheard of. Finally, we agreed an aperitif beer would have to have a definite and interesting flavour of its own, something to lift it out of the run-of-the-mill and give it something worth seeking out, in the same way that the flavour of a good gin can be tasted through the mixer, or Manzanilla sherry is nothing like any other Spanish dry wine. 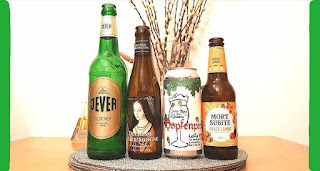 Armed with my wishlist of flavours, I headed to the specialist beer shops. I decided to focus mainly on bottled beer because they are portable, so can be drunk at home, but generally less gassy than canned beer. I tried a number of interesting white beers with citrus and spice flavourings, some fruit beers, American craft beers, Belgian lambic beers and British ales. Obviously, I haven't done anything like an exhaustive survey of the beer world and welcome readers' comments, suggestions and recommendations. Those I recommend in this blog are the ones that got the best response from my tasting team (me, the Beloved, my stepson and his partner), when served with common aperitif foods.

First up, Hopfenpop, by the Brewery of St Mars of the Desert, Sheffield (pictured third from left, above). The only British beer to make the list, it has a good sharp taste and hoppy aroma, bitter-sweet and refreshing. We thought it would work well with salty or fatty foods, such as rich salami or smoked salmon.

Similar to Hopfenpop is Jever pilsener. The hops used give it a slightly herby feel that we loved. Unsurprisingly, we thought smoked sausage would go well with this, but also salted and spiced nuts, olives, strong cheese or coarse pâtés. Of all the beers we tried, Jever was the one we thought most versatile, in terms of likely food pairings.

We've tasted a number of Belgian beers. I have long been a fan of cherry or raspberry flavoured beers, and these would make good aperitif beers, but you need to be careful which brewery you buy from, as many of them are quite sweet. Better to buy a lambic fruit beer, with its characteristic sourness. I also enjoy Kagua blanc, Japanese beer with Yuzu and shanso. I'll perhaps come back to fruit beers in the summer, as they're better suited to outdoor drinking and warm evenings than our current weather (in the north, at least).

Talking of lambic, we tried a couple of gueuze beers. Lambic beers are fermented without the addition of cultivated yeast. The process depends on exposing the unfermented wort to wild yeasts in the air and in aged wooden fermentation vessels. Lambic beers have a typical sour, fruity flavour that works well with many aperitif foods. Gueuze beers are a variant type of lambic beer, where aged and young beers are blended, allowing a secondary fermentaion to take place. They do not taste strongly of hops and are often described as tasting cidery or barnyard-ish. Gueuze beers are certainly an acquired taste, but are worth trying. Gueuze Boon is dry and sour, with fine bubbles reminiscent of Champagne. The Beloved and I enjoyed it with pickled fish. Sweeter, and more to the taste of the younger family members is Mort Subite. Still unmistakably of funky, gueuze character, this sweet-and-sour brew was the one we all liked best. We thought this would serve well with dim sum, sushi or spiced meat canapés.

Finally, we recommend Duchesse de Bourgogne, another sour Belgian beer, this time a Flanders red beer. Like lambics, it has a sour, fruity flavour. The most sour of the beers we tried, even having a sour smell, this is one you wouldn't drink in large quantities, but we thought it would be a good match for nachos, fried foods and "anything you'd put gherkins on" (Kate).

Of the white beers we tried, we liked St Bretta from Colorado. This is light and lemony, not too bitter. However, beware of the 5.8% strength - that lightness is deceptive! I include this one in the final list for one reason only - it was the only beer we tasted that could cope with the taste of truffle.

One last comment on serving beer as an aperitif: don't feel you have to serve the whole bottle or can at once. Remember that an aperitif is meant to stimulate the appetite and leave you wanting more. Better to split the can between two or three smaller glasses, especially if the beer's a strong one.


Unless otherwise stated, images in this post are by Matt Mather.

Next time: this year's festive cocktails