I've found it extremely difficult to get started on this post. The history of rum is inextricably tied up with the history of slavery and the UK's part in it. I was educated in one of the cities most involved in that trade and witnessed some of its continuing legacy of poverty, discrimination and oppression. Learning at a university that had been endowed by merchants who had owned slave ships means that I am also a beneficiary of slavery, too. Recent events have made me acutely aware of the risk of causing hurt by what I write, and I hope you will be gentle in correcting me where I have been insensitive.

Portuguese colonists brought sugar cane to Brazil from Madeira. The soil and climate suited sugar well. However, sugar cultivation is labour-intensive and enslaved people were brought to the colony as cheap labour. The Portuguese also brought copper pot-stills, which they used to distill the fermented cane juice. Although sometimes referred to as "Brazilian rum," it is more properly called cachaça. It is regarded as a separate category from rum and appreciated on its own terms. Modern cachaça is usually bottled at source, but is sometimes aged in wooden barrels, for a smoother finish and distinctive flavour from the different woods used.

In the early years of the seventeenth century, traders brought sugar canes and slavery from Brazil to Barbados. Barbados has a perfect climate for the production of sugar, and it was here that our familiar rum was born. Bajan rum differs from cachaça in that the liquor used is fermented from cane molasses. Molasses is the dark, deeply flavoured residue left after the cane juice has been boiled and the sugar crystals removed. Plantation slaves noticed that it naturally ferments, due to yeast spores in the air, and could be used to make liquor. The slow, natural fermentation retains much of the depth of flavour of the molasses, even after distillation. The colour comes from the oak barrels in which it is aged, typically 5-7 years, and from the addition of caramel prior to bottling. Similar old-style, dark rums are produced in Jamaica and Guyana, each with their own particular character, derived from the flavours concentrated in the molasses.

From Barbados, sugar cultivation, and with it rum production, spread throughout the Caribbean. Colonists from Britain, Spain and France overran the islands, establishing sugar and tobacco plantations and bringing enslaved people wherever they settled. Islands such as Cuba, Puerto Rico and the Virgin Islands produce a lighter spirit, fermenting the molasses more quickly, using cultivated yeast. Today, these rums are typically aged 3-5 years and coloured with a little caramel. Almost all rums are blended so a bottle may contain spirit much older than that. 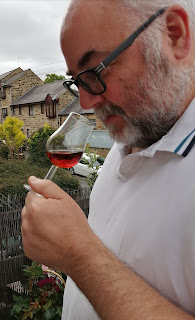 Caribbean molasses was transported to New England, where colonists developed their own style of rum. The cooler climate meant that the fermentation was slower, and dependent on cultivated yeasts. The rum was heavier and drier that that of the Caribbean and often bottled at a higher alcohol level. There are still plenty of excellent rums produced in the region, but they are often difficult to source outside the US.

For over 200 years, rum played a key role in sustaining the slave trade in the Americas. It was even used as payment to slavers. It became the favoured tipple of the Royal Navy because it travelled well and could be stored at high strength, so it wouldn't prevent gunpowder lighting if spilt. Imported through ports such as Bristol, Liverpool, Glasgow and London and blended in huge warehouses on the quaysides, it was traded throughout the British Empire and beyond.

Like gin, the production of rum benefited from Aeneas Coffey's invention of the continuous column still in the 1860s. Many distilleries switched production to the new, more efficient still. There are advantages and disadvantages to every change, though, and I think that, while the Coffey still makes for a smoother spirit that requires less aging, the pot still produces a complex, more characterful rum. It's worth digging out such rums if you can. Indeed, I would go so far as to assert that your average UK drinker does not know the taste of a good rum. By spending a little more on rum from smaller producers, from single estates and enterprises owned and operated in the Caribbean, you will see how rum is something more complex, more subtle and more rewarding that you had previously imagined. I can recommend St Nicholas Abbey rum as an excellent example of hand-crafted, artisan rum from Barbados, with notes of hazelnut and vanilla, and a slightly coffeed flavour. If your taste is for Jamaican, try Hampden Estate or Worthy Park, both independent distilleries owned by Jamaicans. Their carefully produced, traditional rums exude the kind of ripe fruitiness that tipifies the island's rum.  The Hampden Estate is one of the few producers who can boast they still follow perfectly the traditional method of wild fermentation, pot-still distilling and tropical aging. No further sugar or caramel is added, so the colour and taste are all natural. Readers in the USA should also consider trying John Watling's, from the Bahamas, another single-estate artisan rum. It's sadly unavailable in the UK but well worth trying if you can get hold of it.

I have focused on rum produced in the English-speaking Caribbean, but rum is also produced in the former French colonies of Haiti, Martinique and Guadeloupe. The French islands followed the Brazilian practice of fermenting fresh cane juice, and the rum is almost always sold white or very pale.

This rhum agricole, as it is called, is the basis of one of the simplest rum drinks, the Ti' Punch:
Take a lump of fresh lime. Give it a squeeze over a glass of ice and drop it into the glass. Add a teaspoon or so of sugar syrup or Gomme. Stir in a shot of rhum agricole and enjoy. It's easy to see the similarity between ti' punch and caipirinha, made with cachaça, or the daiquiri, made with light Cuban rum. 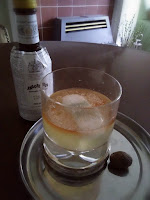 When I'm not drinking rum neat, I like to drink it Bajan-style, in a Planter's Punch. The recipe is easy if you remember the traditional rhyme: One of sour, two of sweet, three of strong, four of weak. Whether you're measuring in teaspoons or buckets, the proportions remain the same.
1 measure of lime or lemon juice
2 measures of sugar syrup
3 measures of dark rum
4 measures of iced water.
Serve with plenty of ice, a splash of Angostura bitters and a sprinkling of nutmeg.


As a guide to which rum to use for a particular cocktail, it's worth paying attention to the geographical origin of the cocktail. The Dark'n'Stormy comes from Bermuda, where the rum is rich and strong. A light rum or a rhum agricole will get lost in the hot ginger and spice flavours. On the other hand, Mojito comes from Cuba. It benefits from being made with a lighter rum that will sit gently alongside the mint. Many bars use white rum for a mojito, which is fresh-tasting but I find it lacks a bit of depth. A light, gently spiced rum (such Liverpool Lost Dock Rum) is a better bet. If you want a cocktail for fresh, white rum, try a Mary Pickford, which you can find in my entry on Hollywood cocktails (http://blog.theaperitifguy.co.uk/2020/02/a-night-at-movies.html) 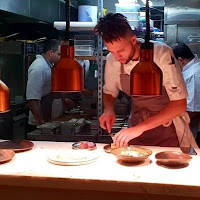 I am indebted to chef Robert Parks for his help and advice in writing this piece. Rob is Head Chef at Copper & Ink restaurant in Blackheath, south London, which I recommend you visiting when you can.

Next time: cooking with rum