Help! What do I do with an octopus??? 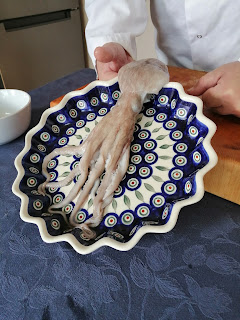 Octopus dishes are delicious. The meat is sweet and delicate and, if properly cooked, it ranges from firm to tender, but should not be tough or rubbery. It is usually boiled to tenderise it and can then be grilled, barbecued, served simply in salad or pickled as part of a meze table. It is relatively plentiful in British waters and not uncommon in restaurants, but home cooks tend to shy away from it. The main reason seems to be squeamishness about preparing it, or nervousness about getting it wrong. Any good fishmonger (including the in-store ones in the supermarket) will clean and gut it for you if asked. I tend not to ask, as it's not a difficult task and allows you to get the 'feel' of your octopus before you cook it.

Your first task is to give it a really good rinse in cold water. There's every chance the fish has released ink as it was caught, and you're going to need several changes of water to get that off. Octopus ink isn't harmful in any way, but it'll discolour everything it touches so you're better off rid of it if you don't intend making it part of the dish. 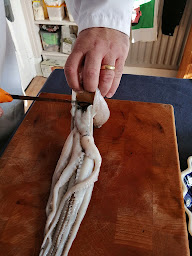 Next you're going to need a good, sharp knife and a little patience. Turn the octopus so that its eyes are towards your board. This will expose the back of the 'head' (it's actually its body), where you can insert your fingers. What you are going to do is gently cut the membrane that holds the various internal organs to the outer mantle of the body. Usually, a small cut is enough, then you can gently pull them apart. As you do this, ease the mantle inside-out, so you can see where you need to separate the organs from it. If you are gentle and patient, it should be possible to keep the organs in their sac, which can then be removed by a single, firm cut at the base. Discard this sac. Have a feel around the inside-out mantle to find the bone. It'll feel like one of those plastic tags that hold the label to your clothes in the shop. Ease that out of it's little pocket below the surface of the mantle and send that on its way, too. 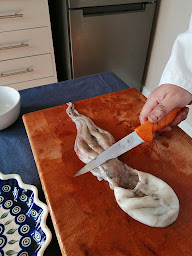 Now turn your octopus over. We're going to take out its eyes. It's important to have a sharp knife for this, so you can take both eyes out in one clean chunk. Make a diagonal cut below the eyes and one above, so that you can take out a wedge of flesh with both eyes in it. Discard this piece.

There is one more piece of the octopus you need to remove, and that's its beak, the hard protein jaws it uses to feed. Some cooks prefer to massage the beak out, leaving the rest of the mouth muscles intact. I prefer to cut out the mouth parts altogether. The arms of the octopus are arranged in a circle around the mouth. If you look at the underside, you will see a black dot in the centre. This is the beak. Place your finger behind this, on the inside of the octopus. You will have exposed this part when you cut out the eyes. If you press this point from the inside, the mouth parts will protrude enough from the underside of the fish to carefully cut around and remove them. Remember you're using your sharpest knife: do not press the knife into the flesh or you are likely to cut your finger.

That's your octopus gutted and prepared. One last rinse in clean water, and you're ready to cook it. 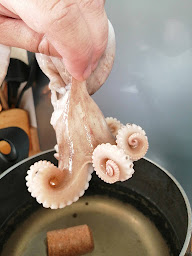 Octopus needs long, slow cooking for it to be tender. The easiest way to do this is to boil it. Fill a large pan with water and add a bay leaf, a teaspoon of salt and a tablespoon of wine vinegar. Italian cooks add a wine cork, suggesting this will miraculously tenderise the octopus. Maybe it does, maybe it doesn't. Who am I to gainsay hundreds of years of successful cooking? I usually put one in if I have one available, but never worry if I don't. Bring the pan to the boil and dip the ends of the arms in for a few seconds. They will curl tightly. Lift them out, then dip them a little further and hold for a few seconds. Repeat this process until the arms are tightly curled all the way up. This doesn't affect the flavour or texture in any way, but it does give you beautifully curled arms, which look pretty on the plate. Finally drop the whole octopus into the water and turn the heat down to a slight simmer. Simmer for at least two hours. The bigger the octopus, the longer you'll need to simmer it. A 2kg fish could take up to four hours. Test for tenderness by inserting a sharp knife into the top of one of the arms.

My favourite ways to serve octopus are all fairly simple. Try this:

Boil a few waxy potatoes towards the end of cooking your octopus. Slice them while they're still hot and put them in a bowl with some chopped green olives, some chopped caper berries, a sliced shallot that you have marinated in a little wine vinegar and a good slug of virgin olive oil. Take your octopus out of the pan and cut it up into bite-sized pieces. Put these in the bowl with the potato salad. Season with pepper and a little salt, give it a stir to ensure it's well mixed, and cover it. Leave it for about an hour for the flavours to come together and serve it at room temperature. Serve with a light, dry white wine, such as Peccorino, Gavi or an English Solaris. 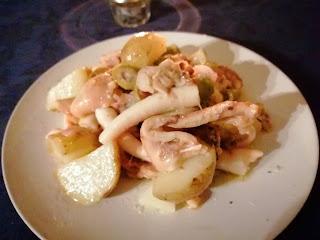 Next time: Oysters - how to eat them, how to cook them and what to serve with them.