28th February is designated "Global Scouse Day" in celebration of Liverpool and it's most traditional dish. Born 15 miles from the city, I grew up nipping into the city for important shopping, major dentistry, significant religious celebrations, theatre and occasional treats. It became "my" city when I used to skip school in sixth form and jump on the train into town to prowl the museums and galleries. (I was a very cultured truant!) By the time I moved there as a university student, I was already half in love, a process that was swiftly completed as I lived and breathed the atmosphere of living there. As a result of its rich history of immigration, trade, prosperity and poverty, Liverpool has a unique culture that really gets under your skin. The city's culinary tapestry weaves Chinese dishes from Europe's oldest Chinatown with Jamaican produce, Irish stout & oyster bars and West African chicken & peanut stew, as well as significant  Scandinavian, Baltic and Greek threads.The most famous dish, like so much else in the city, took a long and wandering journey by sea before it made its home on the side of the Mersey. It appears to have started off as a Norwegian stew, picked up a Latvian (or Lithuanian) name and become popular in Denmark and the northern German port towns of Bremen, Hamburg and Lübek. If you ask for labskaus there, you will be treated to a hash of boiled salt beef and potatoes with pickles. Interestingly, at home, scouse was always called "potato hash," something it most certainly isn't, but I suppose the nomenclature of traditional cookery can be very fluid. From Germany, sea trade brought the dish to the UK, to Wales initially. You can eat lobscows in many Welsh homes today, where it is a full-bodied lamb stew with vegetables. 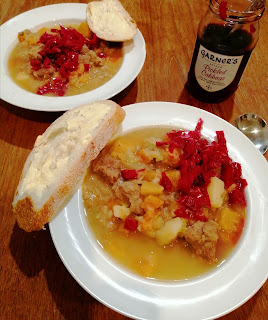 Lobscouse became popular in Liverpool because it is cheap and filling. A large pot can be set on a warm stove to feed people over several hours in port canteens and seamen's hostels. For large hungry families, a mother might make a big pot of scouse, which could be kept on a low flame and topped up with more water and vegetables after every meal, until it went "blind" (lost all meat). These days, there are plenty of outlets making "blind scouse" to cater for vegetarians, and some people even swap the meat for fish. There is no strict recipe for scouse: it's simply a matter of simmering cheap cuts of mutton or beef with onions and root vegetables for several hours. I use swede and carrots. Potatoes are essential, and they must be cooked until they "fall to lob" (ie., break up and start to thicken the stew). I also like to add celery and a splash of mushroom ketchup or Henderson's Relish for a deeper flavour. Many cooks add an Oxo cube, too. A good scouse should leave you feeling satisfied and uplifted. It's good with soda bread and pickled red cabbage, or you can serve it with gherkins to recall its cousin in northern Germany.

For pudding today, I'm making another traditional Liverpool dish, Wet Nelly. Wet Nelly is something between a cake and a bread & butter pudding. It gets its name from its super-moist texture and tastes deliciously of dried fruit and spice. We'll be eating it warm today, with custard, but there'll be plenty left to have cold as a sweet treat with a cuppa for the next couple of days. 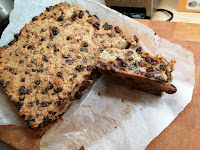 A large loaf of bread, crusts removed and broken into 1" lumps (slightly stale is best)
1pt full milk
small can of evaporated milk
100g butter
140g light brown sugar
2tsp mixed spice
3 eggs, beaten
500g dried fruit ( I like to use a mix of raisins and currants)
You can find out more about Global Scouse Day, including its important charitable aspect, on its website: https://globalscouseday.com/
Next time: some cocktails for Mothers' Day
Liverpool puddings stews traditions