A few weeks ago, I participated in the inaugural Harrogate Beer Week. Forty events celebrating local breweries, hospitality outlets and drinkers were scattered across the town in the space of a single week. Some events were tastings, some tours, some talks and some pure entertainment. All were focused on Harrogate's thriving beer scene. It was a great opportunity to get to know the brewers who make our beer and the stories behind those brews.

Harrogate punches well above its weight in the beer world. It's a smallish town in the north of England, with a population of around 75,000, and yet it sustains five breweries within 4 miles of the town centre, with three more a little further out. With so many fine breweries, it would be easy to imagine a sense of rivalry, but that has not been the case. Collaborative brews are common, and there has been a lot of crossover in staff, so there is a great sense of respect, each conscient of what they owe the others. 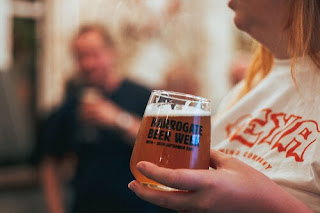 Having plenty breweries means that Harrogate produces a huge variety of beers. While one brewery focuses its energies on supplying high-quality, traditional English ales, another is constantly pushing the boundaries of modernity, turning out experimental brews with new hop combinations and funky artwork. If you want an old-style milk stout, a cask conditioned bitter or a wine barrel-aged Belgian-style saison, Harrogate has it on the doorstep. Every brewery has its own personality, like the members of a family: there's even a cool, older cousin that will lend you their Pink Floyd LPs.

Our town, naturally, has quite a thriving drinking scene, and I think the wealth of small, independent bars makes it rather special. Like our breweries, they each offer something different. Of course we have the big chain pubs, but ask a Harrogatonian where they really enjoy drinking, and they'll give you the name of one of the indies. These bars survived lockdown because, like the breweries, their customers knew and loved them personally. It was important to us drinkers to look after our friends and neighbours who offer hospitality. When I was approached to participate in Beer Week, then, it was obvious why I would want to.

In the end, Harrogate Beer Week became quite a love-in. Brewers came out in force to tell the stories behind their beers, and all commented on how they had been supported by customers during the dark, anxious times. Nationally-renowned writers came to tell us how Harrogate's beer scene shines out in the beer world for its variety, passion and innovation. Licensees gave over their premises to events out of appreciation for drinkers, brewers and writers. Even the local tour guides joined in the fun, offering their take on which are the most enjoyable places to drink. 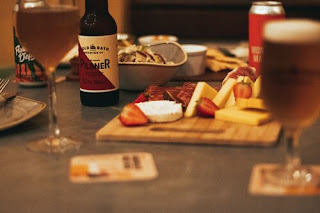 Writing about the event a couple of weeks on, the impression that remains strongest is that it was an opportunity to tell our stories and get to know each other on a deeper level. That, I am certain, will make for a stronger, more resilient scene in whatever future we create after COVID.

All photography in this post is by Ryan Walsh, courtesy of Harrogate Beer Week