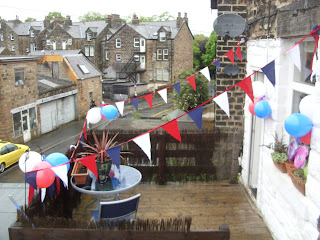 This weekend, the UK, along with several other Commonwealth countries, celebrates the Platinum Jubilee of Her Majesty the Queen. By any stretch of the imagination, 70 years of service is something to marvel at, and many people will be celebrating with parties, trips to events and concerts, or simply having a tipple while they watch the TV footage of others celebrating. Although I'll be at work for three days of the holiday, a friend and I have arranged a celebratory luncheon on Sunday afternoon. Weather permitting, we'll enjoy cocktails in my friend's garden, before repairing indoors for delicious food, lovely wines and a snifter or two of port.

The cocktail we've chosen to serve was actually created for a royal jubilee in Thailand, but we chose it for its lightness and freshness as much as its name. It mixes gin with elderflower liqueur, grapefruit and sparkling wine, and I'm hoping it'll be the perfect foil to my crab barquettes and truffled asparagus vol-au-vents. Queen Elizabeth, like her mother, famously enjoys a gin & Dubonnet. This bitter-sweet mixture was originally named a Zaza cocktail and made its appearance around the time her parents were courting. If your unused to those older, strong cocktails, you should drink it with care: the two ingredients are mixed in equal quantities and served straight (although the Queen is known to prefer it with one ice cube). If you're looking for a cocktail with royal connections, though, this is the one to try. Serve it with something salty and full of flavour to nibble on.

The concoction we now call Coronation Chicken would be unrecognisable to anyone who attended the event that gave it its name. A 1950s chicken would have been older than ours, farm-reared and free-range, spending its life munching on small grubs and kitchen scraps, between the more obvious feeds of grain. As a result, it was far more flavoursome and far more expensive than a modern bird. The curried cream sauce that coated it was delicate indeed, designed to highlight and complement the flavour of the bird. I fear its modern equivalent is there to mask the insipid nature of intensively-farmed poultry. I have written before about the need to face up to the impact our spending choices has on farmers and their ability to farm sustainably, and chicken is an extreme example of that. A large chicken from a popular supermarket costs about £4.00. One reared as they were in the 1950s costs nearer £20.00. No wonder it was considered luxurious enough for the Coronation Banquet!

We've chosen to make the Coronation chicken our starter this weekend. We'll serve it with melba toasts and a herby summer salad. If you'd like to have a go at the original, English Heritage provides a version of the recipe here: https://www.english-heritage.org.uk/members-area/members-events/mw22-recipes-coronation-chicken/ I've chosen a white Bordeaux to accompany this dish. It's acidity will cut through the richness of the dish, but it has enough fruit and herbal qualities to still taste lively against the curried cream.

Living in an area famed for sheep farming, we've chosen lamb for our main. Stuffed and rolled, it is fatty enough to roast slowly and eliminate the need for attention during lunch. We'll be serving a Chianti with this. If you'd prefer something that speaks of English tradition, a roast rib of beef is the obvious choice, with a good claret to wash it down. Alternatively, goat curry, chicken peanut stew, Mughlai Murgh biryani or pork gulasz might all speak more eloquently of the 21st century UK than beef and gravy. 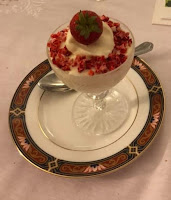 I have seen much coverage of the competition to create a suitable dessert for the Jubilee, and I have to say I'm disappointed. The winning dish looks both delicious and impressive, but you'd need to be an accomplished cook to pull it off. Aside from that, neither its individual ingredients not its constituent parts connect in any way to British or Commonwealth food traditions. A traditional trifle would be much more practical, or a slice of your favourite cake, or an exotic fruit salad with Caribbean rum. For my part, I'm going to serve fresh, local strawberries in naked simplicity, washed down with a light and sweet moscato wine from Italy.

However you celebrate this weekend, and whether you're doing it for the Queen or simply enjoying the long weekend her Jubilee affords, have a happy and sociable time.