With so many friends trying to keep a dry January (or at least a drier-than-most-months), now seems a good time to think about providing aperitif drinks for guests who do not drink alcohol, are that night’s designated driver or who simply want to take it easy for a night.

Our neighbour commented to me just before Christmas that as a non-drinker she often feels infantilised by the choices offered when she goes out with others. While others drink wines, spirits and beers to suit the adult palate, more often than not she is offered pop or fruit juice. No wonder she generally drinks water! I made it my mission to find some grown-up drinks that don’t compromise on alcohol.

Let’s start with tonic water. One of the markers of the adult palate is that it tolerates bitterness much more than a child’s does. Tonic may be sweet and fizzy but it’s unmistakably adult. It’s also fresh and stimulates the appetite so works well as an aperitif. Try mixing it with grapefruit or orange juice (1/3 juice and 2/3 tonic) if you want it to feel like a light cocktail. Tonic works as well for a non-drinker as it does for a gin-fiend on a night off.

On its own, carbonated water can seem a bit dull. Even a nun on a night out would want a touch of vermouth with it. To give it a bit of interest, you can splash a bit of Angostura bitters on the ice before you pour the water. If you still find that too watery, you can try mixing bitters with tonic or lemonade. Check with your guest first, as Angostura does contain alcohol. You’ll not put anyone over the driving limit, but many guests would want to refrain from alcohol altogether. As an alternative, try a fiery ginger cordial and a couple of slices of lemon.

There are a few commercial drinks out there that I have enjoyed. Unsurprisingly, no British producer is marketing their drinks directly at the aperitif market, but I have found a couple of the Fentiman’s drinks very pleasant. In particular, I’d recommend their sparkling lime & jasmine as it’s light and refreshing and not too sweet. Again, be aware that it’s a fermented drink that contains a little alcohol, so check with your guest before serving it. 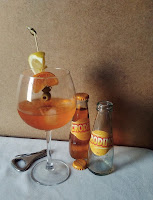 Two Italian drinks stand out for me, both of which are available online. They’re clearly marketed as aperitivo drinks and come in chic, little bottles that remind you of the classic Campari & soda premix ones. Crodino tastes citrussy, with a touch of vanilla and the same kind of bitterness you’d find in an Aperol spritz. That’s hardly surprising, because it’s made by the same company as Aperol. I’d treat it exactly the same as a spritz, garnishing with tons of ice and fruit. San Bitter is a deep red drink, made by the people who do the San Pellegrino water. I don’t find it quite as bitter as Crodino, but it has the same touch of vanilla that reminds you of a very posh cream soda (but not in any way as sickly). Serve it with slices of orange.

Finally, if your January is drier, but not entirely dry, you might want to look for lighter alternatives to spirit to go with your mixers. How about replacing the gin in your tonic with white port? Served cold with lemon, it’s very popular in Lisbon, where the heat demands something refreshing. It contains about half the alcohol of a standard G&T.

Next time: aperitif foods – why do we eat before dinner and what kind of food works best? 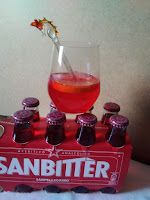