Easter's a special time for me and my family, and food is a big part of that. As I wrote in my Mothers' Day blog, providing food for those I love is one of life's great pleasures. To celebrate the great feast without guests would simply be unthinkable. Unlike Christmas, with its attendance pressures and expectations, there are no 'rules' to Easter entertaining. It can be a rather relaxed affair, giving you time to simply enjoy the presence of family and friends around the table. I'm lucky to have two stepchildren and two grandchildren who love to come to ours at Easter, and delaying the meal to play with cars on the floor is something we can all enjoy.

This year, I served a mimosa as the aperitif. The orange juice base was lovely and fresh in that warm sun we had. That's not to say it was lacking in alcohol. I fortified the juice with a blood orange liqueur from the Wiltshire Liqueur Company before adding Champagne. It's a cocktail that always goes down well! 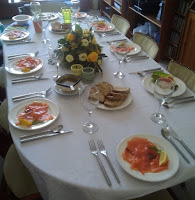 With children around and adults enjoying cocktails, delays become inevitable, so it's important to avoid dishes that require precise timing or last-minute attention. I had cured a side of salmon with mustard and dill and sliced it earlier in the day. All was laid out on the table, ready to eat at 3:00, 3:30 or 4:00pm, or whatever time we eventually made it. Similarly, I didn't want to cook a main course that could dry out. Lamb shoulder is perfect for that. It'll cook slowly without losing any moisture, because it's made up of a series of muscle layers with small amounts of fat between them. It more or less bastes itself! To make life even easier, I sat the lamb on a bed of potatoes and onions, so they cooked in the juices dripping from the lamb. Dessert was a simple lemon cheesecake, baked the day before. The whole menu was planned for maximum flexibility and minimum work once people arrived.

There is one Easter tradition I hold fast to - that of the simnel cake. For those unfamiliar with it, it's a fruit cake with a layer of marzipan (almond paste) baked through the middle. Recipes for simnel cakes have been found dating back to the 13th century, and it makes sense that such rare and exotic ingredients as dried fruits and ground almonds should be used to celebrate major festivals. The name is assumed to be derived from the Latin simila, meaning fine flour, which is another clue to its purpose as a food for festivals. Tradition suggests that a simnel be topped with a second layer of marzipan and 11 toasted marzipan balls, to represent those of Jesus Christ's apostles who remained after his death. Even for an almond-lover like me, so much marzipan can be a little overwhelming on a cake that's not as rich as a Christmas cake, and I've experimented with other designs over the years, trying to keep to religious symbols and toasted marzipan. For the last couple of years, I've used the emblem of a religious order that has been influential in my family's life down several generations. Once you cut it, of course, all the hard work of decorating is destroyed, but you are left with a delicious and surprisingly light fruit cake that goes perfectly with a cup of coffee or a small glass of sweet Madeira.