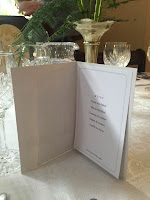 I have given hundreds of dinner parties over the years, and I've come to love the planning stage. In my experience, the planning is the time of exciting fantasies about what you might cook, who you could invite and how your table will look. It's the most creative stage, full of possibilities. It's also the stage, when you start to hone down the ideas into concrete plans, that ensures your event will be a success - an enjoyable time for all.

Have you noticed how often people roll their eyes and sigh in mock exasperation whenever they say the words "dinner party?" For English people in particular, it seems to have become synonymous with social unease, moments of stress and panic in the kitchen, and generalised anxiety about whether you're getting it "right" (whatever that is).

I think that's a pity. There should be few more pleasant experiences than sharing food among friends. It's been said thousands of times, but I'll point it out again, that the word "companion" contains the Latin word for bread. It means the person you share your food with. What has gone wrong, then, in  English-speaking cultures, that we associate this most basic of joys with stress? I'd suggest it is because many of us no longer eat as families on a day-to-day basis. Table companionship is strange to us, and when we cater for guests, we're not sure what we should be doing, so end up trying to do too much.

Now, let me be clear here: I don't belong to that school of thought that says cooking should be as easy as possible. If you have the time, interest and skills to make your own bread and cure your own salmon, then why not do it? Surely your guests deserve the best of you? On the other hand, if you're getting stressed at the thought of making curry from whole spices for the first time, for instance, you're not giving your guests the best of you at all. Buy a jar of sauce and concentrate on what it is that you are talented at, be that decorating a table, or choosing great music, or animating a conversation, or pouring the wine.


So, the first principle of menu-planning is: decide what you can do brilliantly. 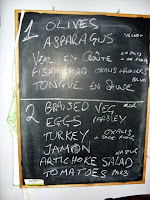 There is no law, come down from God on high or hand-written on royal vellum, that says we must serve dinners in three distinct courses. That's a convention that came in around the end of the nineteenth century. It has its origins in imperial Russia and particularly influenced the great French chefs who worked in Edwardian England. Three courses became standard in middle class households, but we have known four and five courses to be common. I suspect we settled on three during the privations of the Second World War and never quite got over it! Before service russe, as it's called, came in, we served a number of dishes together on the table, mixing hot and cold, sweet and savoury all together, with guests helping themselves to whatever combination appealed to them at the time. Each group of dishes was known as a remove, and a dinner could comprise of two or more removes. This was known as service française, or French service. The huge variety of modern restaurants, and our enjoyment of travel, have shown us that sharing small dishes, like Spanish tapas, Greek meze or Italian cicchetti, can be part of the fun of a dinner, and we have discovered in north African cuisines that an effective dinner can be created from one large main dish with a number of small, tasty accompaniments.

The second principle of menu-planning is, then: decide how you want to serve the food.

We'll look at each of these service styles in the coming weeks, so we can consider advantages and drawbacks each has for the kinds of event you might want to put on. I know most of my readers love to know more about aperitif drinking and cocktail-making, so I'll intersperse the menu-planning series with other posts about summer drinking. In the meantime, dig out your favourite food books, let your fantasies run wild and get creative.