I mentioned a few weeks ago that I love the opportunity to try out new dishes and extend my range as a cook. This winter, a bit of quiet time allowed me to learn how to make the famous French charcuterie dish dodine de canard. This is made from a whole duck that has been boned out, stuffed with flavoursome forcemeat and baked whole. The process takes at least two days, as the duck has to be marinated overnight, when raw, then rested a second night when cooked. Only on the third day or after is it ready to be eaten. Served cold with mild pickles and salad, it makes a spectacular starter at dinner or a tasty main course for a cold lunch.

I first saw a dodine prepared on Michel Roux Jr's TV programme some years ago. Although I could never hope to match his talent, I still decided it was something I wanted to try my hand at. I found a blog that reproduced his recipe, and it seemed straightforward enough. Between the recipe and Roux's YouTube channel, I was confident my attempt wouldn't be too disastrous.

The problem with a dodine is its size. Traditionally, it is made by specialist charcutiers-traiteurs and sold by the slice. A whole one will easily feed 15 people as a starter, and even I don't normally have so many to dinner. Freezing, and a season of small dinners seemed to offer the solution, so I made space  in my freezer for packets of sliced dodine in sizes to suit each event. 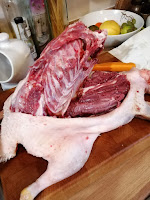 Getting hold of a whole duck with giblets (you need the liver) wasn't difficult, but carefully boning it out to leave all the flesh and skin intact was a bit daunting. My butcher offered some tips, and I watched and re-watched a YouTube tutorial about 15 times! That tutorial showed a French butcher doing it in real time, talking the viewer through what he was doing. It took him just short of 20 minutes. If it takes an experienced knifesman that long, I decided, I needed to give myself a whole afternoon! I have any number of good, sharp knives and chose a fine filleting knife. Slowly, very carefully, I cut along the backbone and started to ease first the skin and then the flesh away from the skeleton. I hadn't realised how problematic the legs and wings were going to be. Getting them out requires dislocating the joint, cutting the sinews free and scraping the muscle from the bone, all without teatring or puncturing the skin. You do have to leave one bone in each limb, so as not to make a hole, but deciding where to stop cutting was a bit of a trial for someone with no training.

Once the flesh and bone are successfully divorced, you need to start adding flavour. Season the inside of the bird with salt & pepper and sprinkle with a little port and some Cognac. Cover and rest in the fridge overnight. I must confess, I was so relieved to have got the carcass out without damaging the flesh that I nearly had a swig of the brandy to celebrate! The bones went into the stockpot with various veg and herbs and will form the basis of a delicious soup sometime. The forcemeat contains marinated chicken livers and farce à gratin, which I learnt (thank you, Larousse Gastronomique) is made from the duck liver, sesoned and cooked in butter with a little garlic. Making the farce and marinating the chicken livers were my final tasks for day one. Safe in the knowledge that I hadn't ruined it yet, I strained my stock, washed up and retired to be to comtemplate my next tasks. 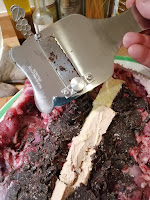 The forcemeat stuffing for the dodine is made with pork shoulder, pork fat and the two preparations of liver, all minced and mixed together well with seasoning. Roux adds pistacchio kernels, which I decided to leave out, but I did decide to add a layer of foie gras and fresh truffle. On balance, I think the flavour of truffle got a little lost and I will either leave it out or be a lot more generous with it in future. I will also add a pinch of quatre épices to give the meat some more depth. Quatre épices is a blend of pepper, ginger, clove and nutmeg that is widely used in French cuisine. With the duck flesh laid skin-side down, I placed a row of slices of foie gras where the breast bone had been, flanked by shavings of black truffle (white would have had more flavour but cost a lot more). I tried to spread the forcemeat evenly in a sort of long, fat sausage down the middle, so that the overall shape of the duck would be vaguely retained.

Next came stitching the duck back up. I was never very good at needlework at school, and sewing together two ends of duck skin with string and a 7" butcher's needle proved to be a bit of a challenge. I had probably over-stuffed the duck, to be honest, so everything was a bit tight, and the fattiness of the skin caused my hands, the needle and string to become very slippery. I started out trying a blanket stitch but soon gave up and resorted to single stitches, each tied off separately. Sister Bernadette (bad-tempered needlework teacher at my old school) would not have been happy! Nor, it turns out, were my doctor friends impressed. What do they know? When the duck's already dead, it's not going to suffer scars from uneven stitching.

The duck is cooked on a bed of vegetables in a slow oven. Roux's video shows the duck going into the oven with the breast uppermost, but I think that was not right for me. Perhaps because of my dodgy suturing, a lot of the fat (including the sweet and flavoursome fat from the foie gras) ran out of the bird as it cooked. Next time, I'll turn it stitched side up, so any fat runs back through the breast meat to keep it moist. Once the duck is cooked, and any juices run clear, it needs to be cooled, then placed back in the fridge overnight to rest and solidify. This makes slicing easier and allows the flavours to come together.

As I said earlier, a whole dodine is far too much for an average dinner party, so I knew I would have plenty left. About an hour before my guests arrived, I took the duck from the fridge and, with my finest, sharpest carving knife, cut it into slices about the thickness of a pound coin. I laid two slices on each plate with lightly-pickled vegetables - leeks, carrots and cauliflower. Dressed salad leaves would be added just before service. I wrapped up parcels of 4, 6 and 8 servings and consigned them to the freezer for future dinners. Chosing a wine to go with the dodine was my final challenge. I'd normally want to serve red Burgundy or Chianti with duck. I'd also normally serve a white wine with my starter, although I'm not chained to that as a principle. I wondered about a light red, slightly chilled. A Beaujolais might be nice. Alternatively, I considered a more serious, full-bodied white, something like a Mersault or a South African chardonnay. These might have been great matches, and I'll certainly be trying them out with those portions still left in the freezer, but I wondered if the rich foie gras might need some sweetness. The answer came in a conversation about something else with my local wine merchant. He mentioned he had just a couple of bottles left of a delicious demi-sec Vouvray wine. It's a long time since I've had medium-dry wine, but I know the quality and richness that Vouvray offers. Served with the duck that had taken so much time and effort, among just a few friends, it completed a beautiful and very elegant starter.

Next time: Irish produce, Irish hospitality & a dinner to celebrate both