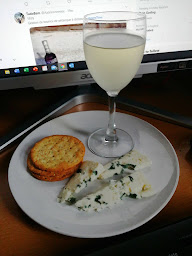 Every now and again, my imagination crashes. Just like when your computer does it, it freezes half way through a task and refuses to get going again, no matter what I do to try to re-engage it. It happened to me last week when I wanted to plan this post.
Nothing.
You may have noticed it, not sitting there at the foot of the page.
No "next time..."
Usually, by the time I'm posting a piece, I know what I want to write about next time. I might struggle to get the words together in the right order, but I'll have a fairly clear idea of what I want to say. This was different; I didn't have a clue what I wanted to write. I started to feel some solidarity with Old Mother Hubbard, staring into the cavernous void of her nursery-rhyme larder and finding only anxiety about what to do next.
Entertaining can be a bit like that, too. You've invited friends over and you're deciding what to serve, but nothing seems quite right. One thing's a bit heavy for the season, another doesn't agree with one of the guests, the third you've served several times before. In reality, we're probably setting ourselves an impossible task. Our friends come to dinner because they enjoy spending time with us, and if you make a great coq au vin they'll probably relish eating it every time. It does no harm to revisit your culinary triumphs or to serve what you might think of as a casual family dish. 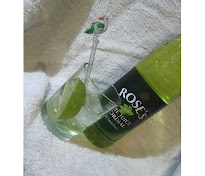 Some of the nicest things I've served have been born out of disasters. I remember, very early on in my cooking career, a cheesecake that didn't set. I was cooking at a friend's house so didn't have access to my own larder or equipment. Guests were due in about an hour, and unmoulding the dessert was the last task before I could tidy up and relax. Collapsing was not part of the plan! After a few minutes of swearing and flapping like an idiot, I told myself it could be salvaged if it didn't need to hold its own shape. My friend came to my rescue with half a dozen Paris wine goblets. The cheesecake mousse was returned to the mixer and given a quick beating. I broke up the biscuit base and put a little in each glass, followed by the mousse. Searching for something to finish it off, I found a jar of lime marmalade, which I melted with a slug of gin and a few drops of green colouring. Once this was starting to cool, I poured a layer onto each glass of mousse and put them all in the fridge. I still get appreciative reminders of my gimlet-inspired lime mousse. 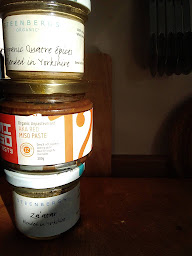 I often struggle with perking up vegetable dishes, and one of the best ways to give veg a lift is to roast it. Now the one vegetable I never grow tired of is cauliflower. I can eat it raw, boiled, roasted, pickled or blitzed down into ersatz couscous. My usual way of roasting cauli is to slice it into 1cm-thick lumps (you can't get tidy slices without a lot of wastage), lightly dress it with olive oil and za'atar spice mix, and shove it in a hot oven on a metal tray. Last evening, I discovered we were out of za'atar so rummaged around the spice cupboard to find inspiration. I decided to give French quatre-épices a try. It's a blend of white pepper, ginger, nutmeg and clove. I sprinkled it onto the cauliflower with a pinch of salt and roasted it as normal. The result was truly sublime. The spices brought out the flavour of the vegetable, which was sweetened and intensified by roasting, without overpowering it at all. It's was lovely, warm flavour, subtle enough to accompany a European meat dish, but would also have been bold enough to star on a vegetarian meze table.
Another vegetable I like to experiment with is white cabbage. I discovered long ago the pleasure of having it braised with lots of butter and pepper. Just shred the cabbage finely and place in a pan with a couple of tablespoons of water, about an ounce (25g) of butter and a good grinding of pepper. Cover with a tight-fitting lid and place over a very low light for a good half hour. The cabbage will release some of its own moisture and, if you keep the heat low and the lid tight, should not boil dry or start to fry in the butter. Recently, I decided to treat myself by using some truffle butter in there, but mistook a package of miso butter for truffle butter. It turned out to be a perfect addition to a fairly bland vegetable, and I'll certainly be adding it to my repertoire of vegetable dishes. 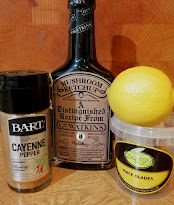 All of these discoveries depend on a few principles for getting by:

One last thing. If disaster should befall you mid-way through a dinner party, you may need a little time to put it right. There's an honourable French tradition known as la pause bourguignonne or la pause normande that should prove useful. Simply let your guests finish the course their eating, tell them you're going to have a pause to let the food settle, and serve each guest a liqueur glass of brandy, marc or Calvados. That'll buy you a good 15-20 minutes to get things back on track.
And as for writer's block? Simply write about your disasters. 😉
Next time: barbecue entertaining
anchovies dinner parties hospitality Japanese cuisine menu-planning mushroom ketchup