Amari - the dark and mysterious side of Italian drinking 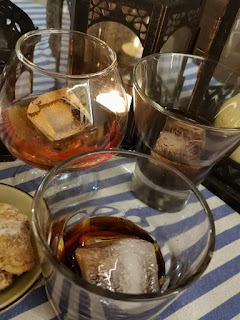 I wrote a piece in October about digestifs: the strong, often sweet drinks some countries produce for after-dinner drinking¹. Brandies and liqueurs are very well known, but it's worth exploring the Italian amari further, as they're so much less well-known. Until the last ten years or so, very few amari have been known outside Italy at all, but north American mixologists, ever on the look-out for an interesting edge, have started to use them more and more in bespoke cocktails.
The word amaro means bitter, and that's exactly what these drinks are. Be under no illusion: they are drinks for grown-ups. The level of bitterness will vary from one brand to the next, but they all carry that same trait. Originally, these drinks were herbal tinctures, tonics created by apothecaries and herbalists, but as access to medicine improved, people continued to drink them for their enjoyable flavours and reputed ability to settle the stomach after a decent meal. So there we have their principal features: high alcohol content, bitterness and herbaceous flavours. Sugar is added to make them palatable. 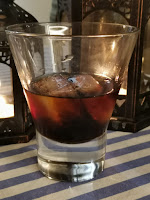 Because every brand has its own flavour profile, it's impossible to describe exactly what an amaro should taste like. Virtually every producer advertises that they follow a closely-guarded, secret recipe of only the best herbs and botanicals from their region. The most common of these botanicals are gentian, wormwood, thyme and citrus peels, but of course these are blended in different proportions and with many other ingredients to create unique experiences for the drinker. This uniqueness is exactly the thing the mixologists love: slight variations in flavour that can make a huge difference in a finished cocktail. Their use in cocktails is very recent, though. If you're going to drink like an Italian, you'll have to learn to take your amaro neat, on the rocks. 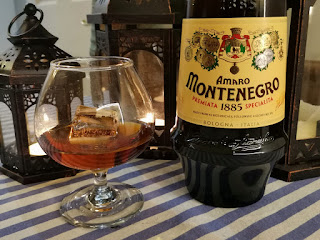 Let's look at a good entry-level amaro, one whose bitterness isn't overwhelming. Amaro Montenegro is made from the usual, top-secret recipe, 40 botanicals, etc. The stand-out thing about it is the shape of the bottle. You won't miss it on the shelf! Despite the recipe being so secret, it clearly contains vanilla and dried sweet orange peel among its ingredients. The bitterness of gentian is very much underplayed and is balanced out by the other, sweeter ingredients. On the nose, it's almost like cream soda or cola, with the sweet citrus note coming out on the palate. If you're not keen on the sharp bitterness of Campari, you might enjoy replacing it with Montenegro in a Negroni cocktail - a MonteNegroni. 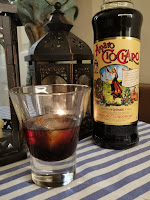 A recent discovery for me has been Amaro CioCiaro (pronounced 'cho-char-o'). This amaro has all the deep, dark colour of an old-fashioned cough mixture. It's actually a deep tawny brown but seems almost black in the glass. The flavour is as rich as you would imagine from a drink with so much caramel. There is definitely liquorice in there, which enhances the warming effect of the alcohol. I would guess at lemon peel, too, and perhaps some pine. You don't notice the bitterness at first. It kind of creeps up on you after you swallow and lingers on the back of your tongue. This is one for people who are used to drinking amari and looking for a strongly herbal version. 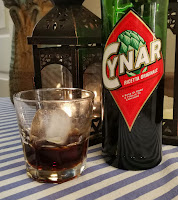 One amaro that is becoming widely known is Cynar (pronounced 'Chee-nar'), named after the artichoke leaves that form part of its (closely-guarded, secret) recipe. The botanical name for the artichoke is cynara scolymus. If Montenegro could be called an entry-level amaro, this is definitely the Advanced-level drink. Both on the nose and in the mouth, gentian is to the fore, so much so that I'm not sure I can identify anything else. There may be a touch of the alpine plant genepi that gives Chartreuse liqueur its distinctive flavour, and this one, too may contain liquorice. I wouldn't stake my reputation on those guesses, though. Perhaps because of the relative simplicity of its flavour, Cynar is the best mixer of the drinks I've reviewed in this post. It's really refreshing with tonic water (try Fever Tree "Mediterranean" tonic) and gives an interesting depth to a spritz if you use two thirds Aperol and a third Cynar.
Finally, a word for my favourite amaro...
The slopes of Mount Etna provide the perfect growing conditions for sharp, red, juicy blood oranges. These are used to brilliant effect in Amara, an orange-forward amaro from Sicily. If you like orange marmalade, you'll love the bitter-sweet aromatic balance of this delicious drink. Unfortunately, it's very hard to get hold of in the UK. I suspect the Brexit agreement hasn't created favourable conditions for importing small amounts of artisan drinks. I have one bottle: I shall continue my quest to find more. 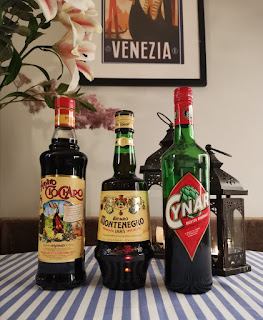 ¹http://blog.theaperitifguy.co.uk/2020/10/after-dinner-drinking.html
Next time:  winter pickles
I am indebted to Nolan from Lattitude Wine in Leeds, for his help and advice in choosing the amari for this post. Lattitude maintains an extensive list of spirits, wines liqueurs and cocktail ingredients, and delivers nationwide. You can contact them via their website: https://latitudewine.co.uk/
amaro digéstifs Italian