We associate the simnel cake with Easter, and now is the best time to get one made, so it has time to mature. It's one of the highlights of my baking (and eating) year - a cake so loaded with my favourite ingredients that I could eat it morning, noon and night. 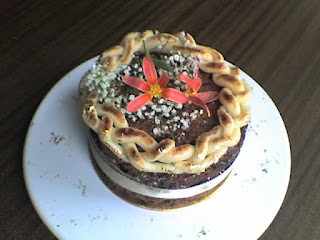 Simnel cake wasn't always so strictly seasonal. True enough, it has always been seen as a cake for special occasions, but the practice of eating it at Easter has its origin in tax and rent regulations. The fourth Sunday in Lent was the day the local churches paid their dues to the "mother" church of their area, and the suffragan sees to their metropolitan see. That's a lot of money moving around, and it needed people to physically transport it. We didn't have BACS back then. The task was not entrusted to poor parish clergy, but to local landowners. Perhaps they thought the wealthy would be less tempted to help themselves. With the landowner (and usually his wife) away for the weekend, the servants were given the day off to visit their family, so that Sunday was a time of "mothering" for masters and servants alike. Young maids, in particular, might take a nice cake they'd made as a gift for their mother, but such a fine cake would often be set aside for Easter, a few weeks later. 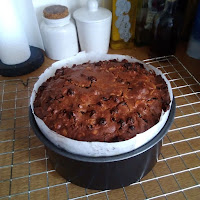 The origins of the recipe that we know today are difficult to trace. Most academics are agreed on the word having its origin in the Latin for finely ground flour, but what of the cake itself? There are mentions of simnels going back as far as 1280, often yeasted cakes or sweet saffron buns, and often cooked by boiling before being baked. The modern bagel is boiled before baking, and as a fan of these, I can only imagine that the early simnels were equally light and soft. Many towns had their own simnels, and those from Bury, in Lancashire, were noted for the large proportion of dried fruit, a thick crust of sugar and a ring of sugar balls. They were very much the kind of cake you keep for special occasions. With so much exotic fruit and nuts, they had to be!

With the advent of the railways, the Bury recipe spread. This led to the recipe being gradually standardised into a rich cake, laden with raisins and peel. The thick crust of sugar appears to have been replaced by marzipan in the last years of the 19th century. Victorian piety, with its revival of Easter as a time of feasting and celebration, is responsible for the burial of a layer of marzipan in the middle, representing Jesus in the tomb, and for setting the number of marzipan balls at eleven, representing the number of Jesus’ Apostles who remained faithful.

To an almond-lover like myself, the modern simnel cake is a thing of wonder. The best recipe I have ever tried comes from Julie Duff’s “Cakes Regional and Traditional.” It contains almonds in four ways: ground, flaked, liqueur and marzipan.

Cream the butter and sugar together until light & fluffy. Add the eggs, flour, spice and almonds a little at a time (alternating between egg and dry ingredients), and mix well with each addition. Fold in the flaked almonds, fruit and peel and mix well, adding the Amaretto to keep the mixture soft.

Divide the almond paste in half. Set one half aside and cut the other in two again. Roll out one of these smaller portions to a disk the same size as your cake tin. Wrap all the rest for decorating.

Spoon half the cake mix into the prepared tin and place a disk of almond paste on top. Now spoon the rest of the mixture onto it and level it out. Bake for 90 minutes, then reduce the oven temperature to 140°C (120 fan), gas mark 1 and continue cooking for another 60-90 minutes, until the cake is risen, feels firm to touch and is an attractive golden-brown. Remove from the oven and leave to cool completely in the tin.

I'm particularly fond of serving simnel cake as a mid-morning treat on Easter Monday with a glass of sweet Madeira on the side. If you want to be a little more sensible, strong coffee or Assam tea are almost as wonderful with it. I'll leave it to you to decide how to make the most of it.
This post is based on an article I wrote for "Handpicked Harrogate" magazine, published in April 2021
Easter Madeira simnel cake