Last year, the Beloved and I were going on holiday to Sitges and Barcelona in north-east Spain. I messaged our neighbour, who's from Valencia: “What aperitif should I drink in Catalunya?” I was stunned how quickly the reply came back: “Vermouth.” Just one word. No hesitation, no explanation, just “vermouth.” 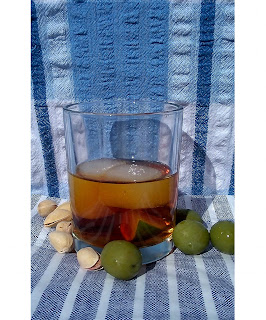 Let’s be honest, vermouth isn’t something you associate with Spain if you don’t drink there a lot. I’d expected to be advised to drink Cava, sherry or an interesting cocktail made from some local spirit or liqueur, so her answer stunned me. 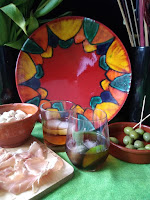 Being an obedient sort, I headed out to a suitable-looking bar on the first evening and rather nervously asked for “vermut” (pronounced “bear-mutt”). The waiter handed me a bar menu, detailing at least a dozen local vermouths, including a special offer for 4 plates of snacks with every 2 glasses ordered of their house aperitif. Their vermouths ranged from light and cheap to very expensive, and each was described in terms of which prize it had won in which year. Catalans, it seems, take their vermouth very seriously indeed! This small region, a little bigger than Wales, produces tens, if not hundreds, of fine quality vermouths and pits them against each other annually to find the best. Drinkers all have their favourite and will tell you why you should try it before all the others.

Vermouth culture in Catalunya isn’t just about the drink, of course. I’d noticed the previous year in Madrid that bars often advertised vermut in their window and had been told that the locals all drink vermouth on a Sunday. How odd! Not really: what I found out in Barcelona is that “fer vermut” doesn’t simply mean to have a drink. It encompasses the vermouth, some snacks, relaxation, political debate, family gossip. You name it. When Spanish and Catalan families fer vermut on a Sunday afternoon, they spend a good couple of hours together. The drink is important, but not the purpose. My literature-teacher Godmother might have explained this is an example of synecdoche – naming part of something (in this case the drink) to stand for the whole (the 2 to 3-hour social occasion around a drink and some snacks), and our phrase might best be translated as “to enjoy an aperitif hour (or two, or three) with others.” Catalan is a lovely, succinct language. 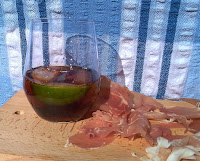 Spanish and Catalan vermouths are not easy to come by outside their homeland, which is a shame. They stand up to anything Italy and France have to offer. Red vermouths, by far the most popular, divide into rojo (red) and negre (black). The red is lighter, both in colour and flavour. They can be as light as pale amber and tend to be herbal in flavour. The negre is dark brown and tastes sweeter, with sometimes a hint of vanilla and spice. Some enjoy the bitterness of orange peel, others gentian and even pine. One or two of the vermouth houses produce white versions, which are not as dry as their French cousins but fuller bodied than the Italian ones. 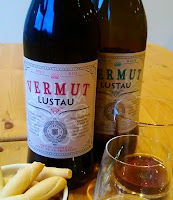 Here in the UK, I’ve found a sherry-based vermouth by Lustau. The white is dry on the tongue and pleasantly astringent with myrrh. The red has a rich depth of thyme and spices. Both will go well with chorizo or ham, fried broad beans ("habas fritas") and big, juicy olives. Now that the sun's returning, I'm looking forward to some afternoons outside with the Beloved, learning a little more Catalan from the Valenciana next door.

Popular brands in Catalunya, if you can get them, include Mascaró, Casa Mariol and, paying tribute to one of the region’s most famous sons, Miró. All are excellent to drink with ice and a slice of citrus fruit (try lime). Why not buy a bottle and start your own family tradition of fer vermut of a Sunday lunchtime?