This week has seen St David's Day, a day of celebration in Wales and its diaspora. I created a couple of cocktails you might like, and the recipes can be found here: http://blog.theaperitifguy.co.uk/2019/03/two-new-cocktails-for-st-davids-day.html

Ever since I was a child, I have been drawn to Wales. Not just to the land that lies a little way south-west of my native town, but to the very idea of Wales, of a country so different from my own that it is simultaneously both foreign and home. With this in mind, I organised a dinner last summer to celebrate the great food and drink produced there. The Beloved and I decided to take a roadtrip around the coast: part research and part holiday.

Day 1 – wine and a beautiful dinner

We had driven down to Chepstow to begin and stayed with an old university friend and her husband. Leigh was kind enough to take us out to see his property the following morning. He was very proud to point out that even the manure he uses as fertiliser is from organically-raised animals. His love for his work, his knowledge of the soil and climate and his pride in the quality of his produce were the first notes of what was to become the trip’s theme-song.

Saying goodbye to Alyson & Leigh, we found our way (thanks to satnav) to Llanerch vineyard, just beyond Cardiff. It’s not easy to make wine growing commercially viable in the British climate, and Llanerch has diversified into hospitality. The bistro there was busy with visitors and locals, and we were shown the wedding/conference facilities and hotel accommodation.  We bought berry-scented sparkling rosés to serve at my dinner. We also picked up a few bottles of an off-dry white that was to go with a fish dish.

St David’s is a tiny, beautiful city, surrounded by dramatic coastland and fine farmland. Here, we discovered St David’s Kitchen, a small bar-restaurant specialising in local produce. The giant map of the St David’s Peninsula on the wall is marked not with towns and villages but with the produce they source from each farm. Their gin list includes a number of Welsh ones. It wasn’t yet available when we visited, but they have recently launched their own gins, flavoured with locally foraged botanicals. I must also add that the gin enjoys the most beautiful packaging of any I have ever seen.

Driving north from St David’s you become immediately aware that English is no longer the majority language. We stopped off in Cardigan for lunch, where the only English we heard was in response to us. We met up with another friend, Daf, and his Mam for lunch. In an unprepossessing riverside café, we had the most amazing fish chowder. Daf and his Mam coached us in a little useful Welsh over lunch.

Daf told us not to leave the area without visiting Caws Cenarth. I’m glad we were obedient to his admonishment. Not only did we have a tour and tasting, we enjoyed enjoyable conversation with the owner’s son-in-law, who alerted us to the presence in the area of a farmer producing cured lamb. This was exactly the kind of thing I was wanting to celebrate. Caws Cenarth itself produces a range of interesting cheeses. My favourite was the washed-rind Golden Cenarth, which I was pleased to find in my local M&S, but which can be ordered online direct from the dairy. You’ll find links to all the producers at the bottom of the page.

Day 3 – Amazing fish, a voyage of discovery and another vineyard

The next day, Daf took us to Aberystwyth because he wanted to show us Pysgoty specialist fish restaurant on the quay. Pysgoty is absolutely tiny. When the weather precludes sitting outside, there’s room for about 12 diners. However, the food is stunning and worth putting yourself out for. The chef is a Welsh-speaking Pole who really understands fish cookery.

We had checked Google for the farmer that cures lamb and come up with a postcode a couple of miles away, on our way back to Daf’s. Having got lost a couple of times, we eventually turned into a yard we thought could not be the right place. The sound of large dogs barking made us wary enough to send Daf out. “Go and tell them in Welsh what we’re looking for. They might not set the dogs on us!” We needn’t have worried. The farmer and his daughter welcomed us into their home like long-lost family. We were given tea, samples of cured meats and home-made chutney.

Our final port of call was the Llaethliw vineyard, nestling in alongside the Aeron river as it makes its way to the sea. We were greeted by the owner and his son, who told us how the vines are planted and maintained and their plans for expansion. This was no professional tour; Jac was able to describe how the soil changes from one end of the property to another and what makes each grape variety suitable for its position in the vineyard. That same love we had noticed in Leigh at the beginning of the trip. We came away with sparkling whites, still white and a couple of reds suitable for roast lamb.

Day 4 – reflections on the way home

Although we had stayed in nearby a B&B, Daf and his family had made us welcome in their home and fed us well in the evenings. This is something we saw in others throughout the trip. I wonder if rural communities have a better appreciation of the importance of this aspect of human interaction. It was a wrench to leave. Driving north, we reflected on the good things we’d eaten, drunk and shared. Every supplier we met was interested to hear why I was researching Welsh food & drink. Everyone was keen to share insights, recommendations, stories. Everywhere we found the same love for producing high quality meat, cheeses, veg, wines, honey, beer, spirits… 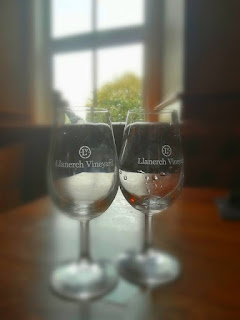