Great Game (and an Edwardian revival)

One of the great advantages of living in a town such as Harrogate is having ready access to amazing produce. For a small town, it still boasts plenty specialist grocers and delis, independent fishmongers, butchers and greengrocers. One thing I rarely buy, though, is game birds. The thing is, when you live in a rural area, it doesn't take long to make friends who shoot. I've lost track of the times I've arrived home from work to find something dead hanging off the back door, and I've had to teach myself to pluck, gut and clean various birds and small mammals. Mercifully, I'm not squeamish! If I know someone's going out, I might put a request in, but you never know what's coming back. Pheasants are common, but I've also had mallard, teal, pochard, partridge, rabbit and hare.

In the UK, at least, game cookery has become associated with the upper classes and country houses, and I do think it has suffered from a degree of inverse-snobbery about that. The reality is that many game birds can be bought at a reasonable price from independent butchers, good markets and a number of online specialists. If you buy from a retailer, you won't have to do the messy stuff yourself.

Where you won't find much game meat is in a supermarket. The supermarket business model doesn't welcome the variable supplies that result from nature's attempts to escape man's gun. Nor is it set up for processing small bodies that still contain the lead shot that saw them off. I suspect, too, that supermarkets thrive by distancing the consumer from the animal their food once was. Game birds, even in their oven-ready state, are just too obviously dead animals for them.

I love game. I look forward to the return of autumn each year, so I can serve game dishes. Because a game animal has spent it's life running and flying over a wide area, its meat is leaner than meat from domesticated animals. The flavour is usually stronger, too, and people talk of a characteristically "gamey" tang that comes from a mixture of the animal's wild food and the meat being aged without bleeding. Because the meat is so lean, you do need to be careful with the cooking, as it can dry out very quickly. Young birds are best cooked quickly and served still pink. Older birds make delicious casseroles. All game birds match well with my favourite wines: red Burgundies. That may or may not have something to do with my loving game cookery so much.

Although, we often associate game cookery with an older style of cookery, that's only because our imagination has become limited. Pheasant doesn't need bread sauce. It's delicious cooked à la normande, with cider and apples and it makes a truly amazing curry. Cook rabbit with black olives and tomatoes, as they would in Malta. Try searing pigeon breasts in butter, then flame them in herby Green Chartreuse liqueur and finish with a splash of cream.

There is one game bird I wouldn't want to modernise, though, and that's the woodcock. It's not easy to come by, because it's not easy to shoot. It lives in woods, and has a darting flight that makes it an impossible target for all but the most accomplished marksman. If you find them, they'll be sold whole. They may be plucked, but they'll have their head and legs still attached and their abdomen intact. They are cooked whole and reward anyone willing to try them with the most blissful experience. The gameyness of the meat is surprisingly subtle, and they have a sweetness you won't find in any other game bird. Traditionally, the pluck (the innards) is removed right at the end of cooking and finished with a little brandy in a pan, before being spread on a buttered crouton, on which the bird is served. Although eating a woodcock has been described as "an autopsy on a plate," I would still recommend it to anyone who loves their food.

All of which brings me back to the town I've made my home. A few years ago, some internet search for something else led me to an out-of-date site that referenced a "Harrogate Sauce" for game birds. I had to find out more. It turns out that this was a popular sauce in Harrogate's Edwardian heyday, made from wine, spices and the roasting juices from the bird. Central to its wonderful, savoury flavour is mushroom ketchup, an older condiment you can get in specialist grocers or the better supermarkets. Within the UK, you can get a list of stockists on the manufacturer's website: http://www.geowatkins.com/stockists . Outside the UK, you can buy it from https://www.britishcornershop.co.uk/ 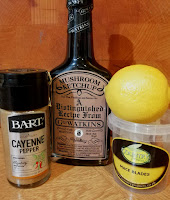 Place all the above in a bowl and leave to steep while you prepare the birds.


Prepare your game birds for the oven as usual, and add 2 finely chopped shallots to the roasting tin. Roast as per your recipe, then remove the birds and let them rest in a warm place.

Add a good splash (about 30ml, perhaps) of hot water to the roasting tin and place on the hob to deglaze the tin. Scrape any sticky bits from the bottom of the tin into the water, then pour all the juices, shallots and sticky bits into a saucepan. Add the mushroom ketchup mix and place on a medium heat. Simmer for 15 minutes to reduce the sauce a little and intensify the flavour. Add a small glass of claret just before you plate up your birds. Strain the sauce into a suitably classy sauce boat and serve.

Next time: new wines from Yorkshire!