Exciting Developments for Whisky and Gin

October 21, 2019
A few months ago, I wrote about our visit to The Lakes Distillery and my fascination with the approach their Whiskymaker takes to maturing and blending whisky. You can read that post here: http://blog.theaperitifguy.co.uk/2019/08/a-distillery-visit.html


I was contacted again by the Lakes Distillery to inform me that their first widely available single malt whisky has been released. The whisky has been named The Whiskymaker's Reserve No1, the first in a series of limited releases showing off the skills of Dhavall Gandhi, the whiskymaker whose approach so fascinated me in the summer. Since the communication from The Lakes also offered a sample for tasting and review, I couldn't resist accepting! 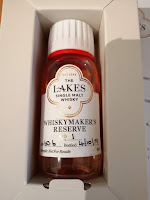 If you follow me on Twitter, you will have read my impressions the evening I opened the bottle. Having said in August that The One was not my style of whisky, preferring as I do a more peaty taste, I was expecting to be a bit underwhelmed. That was not to be the case at all. The Whiskymaker's Reserve No1 is matured in a number of different sherry casks, from oloroso, cream, fino and Pedro Ximines sherries, in two different sizes and made from three different types of oak. Through careful blending of the spirits in this crazy collection of containers, Dhavall has achieved a whisky of exceptional beauty and interest.

The first thing you notice is the colour. The photograph to the left is not enhanced in any way: the whisky genuinely has a hint of apricot in its colour. When you open and smell the bottle, there is the unmistakable, rich aroma of raisins, presumably from those PX casks. Tasting the spirit neat confirms the taste of raisins and a hint of peaty dryness on the finish. Adding a generous splash of water to ease back it's 60.6% ABV strength somewhat, the taste opens up layers of dried figs and Agen prunes, something akin to thyme and hints of vanilla and chocolate. The dryness returns on the finish, with a gentle reminder of the fino sherry casks that have contributed to the maturing of this fascinating whisky. Another blogger has commented on the shortness of that finish, but I could still taste the whisky for about 15 minutes after finishing it and could smell prunes and apricots in my 'dead' glass even the following morning.


Dhavall Gandhi has come to whisky making via an interesting route. Originally working in corporate finance, he was encouraged to visit Kentucky one weekend and, visiting every one of the state's distilleries over two days, realised what direction his nose was taking him. He studied brewing and distilling in Edinburgh and went to work first for Heineken and then The Macallan. There, Dhavall became an expert on maturation and blending, and especially on sherry casks. The Lakes Distillery have, wisely, given him carte blanche to create whiskies according to his own style and creativity. By doing so, they are forging a particular identity for their own whisky which, I suspect, will influence the way English whisky is understood in future. 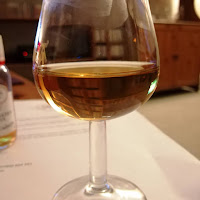 Dhavall has not limited himself to whisky, though. He's now turned his attention to The Lakes Distiller's gin. His approach has been one of "less is more," focusing on three key botanicals and making sure the drinker can taste each of them but above all the juniper. He has introduced a longer maceration of the botanicals and slowed down the distilling to make sure they give the fullest flavour possible.

I already loved The Lakes Gin. It was clean, crisp and perfectly-suited to my tastes. It was with trepidation, therefore, that I asked for a sample of the new version. It's bottled at 46% ABV, so I tasted it neat, with a splash of water and mixed as a G&T with Fever Tree traditional tonic water, ice and a slice of lemon. Finally, I mixed the same G&T with the old Lakes Gin, to compare the two versions. My impressions were tweeted in real time (including a break to buy tonic) last Tuesday evening. 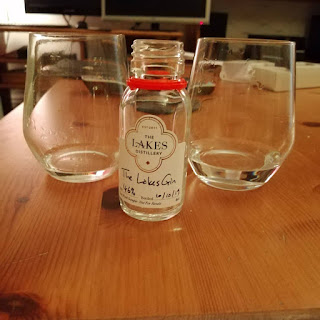 Smelling the gin neat, the first thing you get is a massive hit of juniper. I thought I could also detect
lavender, too, although that is not one of the named botanicals. With water, the juniper is rounded out a little and the sweetness of orange peel becomes more noticeable. Not that this is anything but a dry gin. What the orange adds is perhaps better described as softness than sweetness, an aroma of sweet oranges. It's also now that the black pepper comes out. It lends a lovely perfume to the gin, and it warms the tongue.


My break to buy tonic revealed something very unexpected, something one perhaps doesn't look for in gin: a very lingering finish. I could still taste a very fruity juniper flavour a full ten minutes after I finished the glass with water. 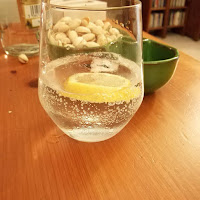 It's when you add tonic, though, that this gin really comes alive. All that juniper returns to whack you right at the back and sides of the tongue with proper ginny bitterness. The aroma is wonderful, full of sharp orange zest and peppery perfume. So well does it marry with tonic water that it's impossible to tell where the taste of the gin ends and that of the mixer begins. When compared to the old Lakes Gin, this one is a much classier spirit altogether. While I'd loved the old one, the new version has a much fuller aroma and lingering taste. It's a good, classic London dry gin, and I'm pleased to think this is the likely direction that gin is heading again, after all the silly excursions through sweetened and over-complicated novelties. While it's too good a gin for many cocktails, it would certainly enhance a Martini or cut through the complexities of a Last Word.

I have heard this week that The Lakes Distillery has brought forward the release of its second widely available single malt whisky. Imaginatively titled The Whiskymaker's Reserve No2, it's been matured in a mixture of red wine and sherry casks. I haven't tasted this one yet, but I'm certainly looking forward to the opportunity when it arises!

A note about endorsement:
I do not accept money or gifts in exchange for positive comment. I was provided with 60ml samples of the spirits by the distillery. When I comment positively on any product in my blog, it is because I genuinely enjoy drinking or eating it.


Next time: Falling in love again