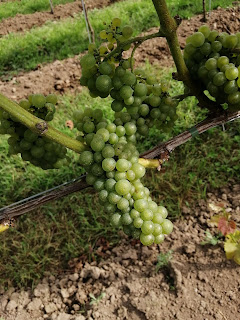 Although the British have been importing wines, off and on, from the time of the Roman Empire, wine drinking has been the preserve of the wealthy for much of that history. From the late 1970s, a number of wine merchants set out to change that, first by introducing sweeter, German wines, then fruity New World wines, until we were drinking so much that the UK is now the biggest importer of wines in the world. It's surprising, too, how quickly we have taken to wine growing. Historians will shout out that those Romans planted vines in the first century, but you wouldn't call it a significant industry, and it was more or less confined to the southern parts of what is now England. Today, more and more land is being cultivated for vines, as the English and Welsh discover what can be achieved with the right grape varieties and careful viticulture. Scotland and Northern Ireland have not yet produced wine on an economically viable scale. I've written about Welsh wines in the past (http://blog.theaperitifguy.co.uk/2019/03/wales-foodie-roadtrip.html); this time I'll focus on my nearest producer, Dunesforde Vineyard, in North Yorkshire.

For readers who don't live in the UK, it's worth pointing out a little geography. My home in Yorkshire is in the north of England, where we can't rely on the sun, even in the best of summers. We can rely on the rain, though. Our climate makes commercial wine growing difficult but not impossible. I was invited to England's newest vineyard, Dunesforde, just up the road from me. If you'd like to know more of the story behind the vineyard, and what led James Townsend and his family to plant in this particular corner of a Yorkshire village, have a look at this article I wrote for the Yorkshire Times last week: https://yorkshiretimes.co.uk/article/Yorkshires-Newest-Vineyard


The owners of Dunesforde are confident that the difficulty of life up here for their vines forces them to produce grapes of particular complexity and interest. There was only one way to find out! 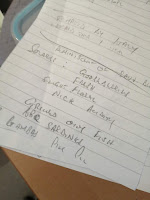 James showed me around the vineyard itself, talking passionately about the potential each of his grapes has for producing wines of high quality. This year, they have released two still wines, but they have also produced a white sparkling that will be released at a later date. They hope in future to produce a sparkling rosé. James sees the solaris grape as the workhorse of the vineyard. It is strongly resistant to disease and produces a reliable crop early in the season. It's used in both Dunesforde's still and sparkling wines. Tasting the still wine, I was reminded of French sauvignon blanc - not those in-your-face wines from the southern hemisphere, but the subtler flavours of the cooler Loire valley. My tasting notes from the afternoon record: "fresh, gooseberries, slightly floral... nice acidity." There's possibly a hint of mango or something tropical in there, too. Not bad at all for North Yorkshire! I've noted "serve with oily fish." James and I discussed a range of food matches for this wine, all of which involved fish. Grilled sardines and/or mackerel came out on top, but we also considered smoked eel, kippers, fresh herring and gambas pilpil - Spain's delicious king prawns in garlic & chilli oil. At a recent dinner to celebrate English wines at the famous Yorke Arms, chef Frances Atkins paired it with a more delicate dish of lobster, North Sea cod, artichoke and dulse (a sea vegetable). 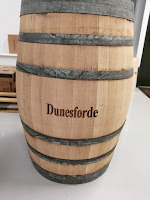 Turning to the next wine, James explained that they had had a slightly smaller yield from the Bacchus vines, which are more temperamental. However, he also speaks with passion about Bacchus' potential to emerge as England's great wine-producing grape. Tasting it, I am reminded of dry riesling. My notes mention "English apples... herbal, blackcurrant leaves." There's also a side note querying coal tar or petrol. It's something you wouldn't normally taste in white wines, but an aroma so slight that it appears to give real depth to the herbal notes. Believe me when I say it's very exciting, and it's this characteristic that I found most reminiscent of those rieslings. The bacchus still white would be a perfect match to crab, lobster and especially to langoustines (AKA scampi or Dublin Bay prawns), and I found myself craving a good bisque to taste with this wine. The bacchus would make a great aperitif wine, nicely chilled and served with a few salted almonds or a little Serrano ham.

Both of these wines are available to buy on the vineyard's website, https://www.dunesforde.com/our-wines, where you can also pre-order their sparkling wines, which will be released next year. 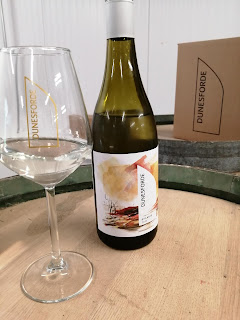