Although Covid-19 has put put paid to a lot of the conventional activities of Hallowe'en, Mischief Night and 5th November, we still have plenty scope for making fun at home. Indeed, home is the best place to rediscover the joyful spirit of those celebrations, as they were family celebrations before they became bigger ones. If you have children, this might be a great time to introduce them to the cultural roots behind the festivals. 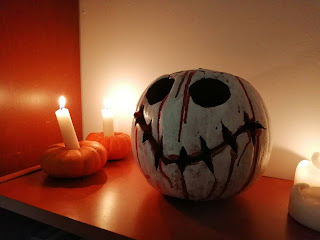 Hallowe'en in the UK has its origins in the Celtic festival of Samhain, a "thin time," when the world of the living and that of the dead were brought close together. Among the festivities were simple games, playing tricks & practical jokes, and dressing up. Like many Pagan festivals, the beliefs and activities of Samhain were given a Christian gloss by the fifth and sixth century missionaries as a way of explaining and promoting their faith. The "thin time" sits comfortably with the theology behind All Saints' and All Souls' feasts at the beginning of November. For untold generations, then, this has been a time to remember the dead, to tell tales of their proximity, to celebrate their closeness to us. All Saints' Day is a major festival for Catholic Christians, one that has been anticipated with evening and night-time vigils, and the events of these few days have become mingled into one winter folk festival that has many activities and traditions. My grandsons usually enjoy Trick or Treat, an American tradition that has its roots in Scotland. Scottish settlers brought with them the idea of 'guising:' going out in fancy dress to beg treats from neighbours and play tricks on the ungenerous. English readers will remember asking neighbours for "a penny for the guy" in the days before Bonfire Night, too. All these traditions are related. 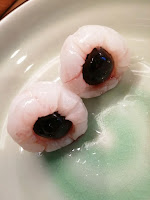 As a household of adults, we'll be celebrating Hallowe'en at Aperitif Towers with a dinner. I thought we'd start with Bloody Mary cocktails and ghost stories. Canapés will feature frankfurters cut to look like severed fingers and mozzarella balls painted up like eyes. Offal will have to be the order of the day for the rest of the dinner, and I've got a nice calf's tongue that I'll present whole before serving it with spiralised celeriac and carrot "intestines" in remoulade sauce. My main course will be a warming pork stew, made with morcilla black pudding (blood sausage) and a very rich red wine. The table will be dressed in black and lit with pumpkin lanterns. I have a ginger cocktail lined up for after dinner, which I'll garnish with more eyeballs, this time made from lychees and cherries. There'll be games and suitable music, and there may even be a few tricks.
You can see me making a couple of ghoulish cocktails here:
The fifth of November had its genesis in a very specific event in a particular year, but the method of celebration is much older. We've always gathered around fires as a community during the dark evenings of winter, and the doings of Guy Fawkes in 1605 linked the fires of Samhain to a national celebration of his defeat. Fawkes was one of a number of men who had plotted to assassinate King James I by blowing up Parliament during the State Opening, with the intention of overthrowing the King and government and replacing them with one more favourable to the Catholic cause. Marking the anniversary with fires and celebrations began spontaneously very soon after. Over four centuries, the events have been marked with greater and lesser fervour, depending on the prevailing national mood, and have swung between deeply sectarian in character to passively so, and from patriotic to simple fun. A constant feature has been the gathering around a fire to burn an effigy of the unfortunate plotter. Fireworks, as they became more widely available (and affordable) made an obvious link to the plotters' gunpowder and have become a colourful and enjoyable part of the celebration. 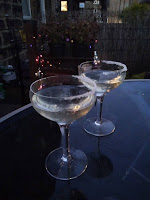 If you're going to celebrate Bonfire Night at home, safety must be your first concern, but with careful supervision children can still enjoy the festival. Traditional foods are sweet and sticky: toffee apples, parkin and treacle toffee. Drinks need to be warming. It's a good time for mulled wine and hot toddies. As a child, I loved hot Ribena. As an adult, I'd probably seek out a sweet porter or dark, Trappist-style ale. Ginger liqueur would make a delicious and warming addition to sparkling wine. We tried it the other night with Prosecco, lemon juice and gin. It made a delicious twist on the old French 75. Another spiced liqueur that mixes well with Prosecco is the cinnamon-flavoured Goldschläger. This has the added attraction of tiny fragments of gold that will catch the flickering light from your fire.

Several years ago, I went through my Mum's recipe book to steal all the best recipes I loved in my childhood. Here's her treacle toffee for you:

Line a baking tray or Swiss roll tin with parchment or silicone paper and grease it well. 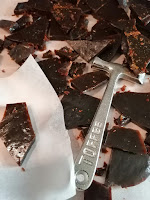 Place all the ingredients into a pan and slowly bring to the boil, stirring occasionally until the mixture is smooth and free-flowing.

Let the mixture boil vigorously for 15 minutes. My Mum never had a sugar thermometer, so some years the toffee set firmer and others it remained very soft. To be sure, use a sugar thermometer: it needs to reach 140C. As soon as it reaches that temperature, pour the mixture out into the prepared tray. Be very careful with this hot liquid: it will burn very badly if it gets on your skin.

Leave the tray in a cool place for about 20 minutes, then cut even sections in it with an oiled knife. When it is completely cold, you should be able to break it along those cuts, to make nice, even pieces.

Store in an airtight container, separating the pieces with more parchment or silicone paper. Make sure you keep the toffee in a dry place. If any moisture gets to it, it will soften and stick together.