" He was a bold man that first ate an oyster." Jonathan Swift 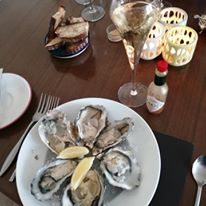 I wrote last week about preparing octopus for the table. I'm quite convinced that more people would eat cephalopods like octopus and squid if they knew how to prepare and cook them. I'm less sure that's the case with oysters. For all their aphrodisiac reputation, they're not the prettiest thing; not the sort of thing you would look on and assume to be delicious. I suspect the first person to eat an oyster was not so much bold as hungry, and willing to try anything for the sake of filling their belly. Oysters were once so plentiful in British waters that they were eaten only by the poor, having little or no value. It is only with over-fishing and habitat destruction that they have become rare enough to entice the rich.

One mistake people make when they first try oysters is they imagine they must be served raw. We all know this is the popular way to serve them, but there are many delicious recipes for cooked oysters. These dishes may be a less challenging introduction to them than being faced with a bowl of crushed ice and a dozen shells. You can buy cooked, smoked oysters in the tinned foods aisle of many supermarkets. They are delicious and can be served on canapés or wrapped in unsmoked bacon and grilled, to serve as Angels on Horseback. Many online fishmongers sell fresh oysters ready-shucked and frozen, which is a great way to buy them if you plan on cooking them.

One dish I cook regularly is Oysters Rockefeller. This is a classic American way of serving oysters. Its name is said to have derived from the amount of butter used, making it "as rich as Rockefeller." 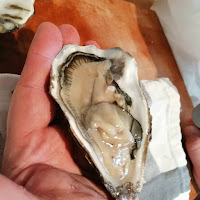 If you're using frozen oysters, choose nice dishes to serve them in. They need to be heat-proof, as they are going under the grill (broiler), and should hold enough for one serving. If you're using fresh oysters, a microwave will make it easier to shuck them. Start by washing the oysters thoroughly to make sure the outside of the shell is clean and free of any sand and debris. Place the oysters, hinge end down, in a non-metallic bowl and blast for half a minute on full power. If any fail to open, give those 20 seconds or so more. After that, discard any that remain closed. You should now be able to open the oysters easily, cutting them free from the shell with a sharp knife. Wipe off any bits of broken shell with a piece of damp kitchen roll and set the oyster meat aside while you clean the inside of the shells and make the stuffing.

Fry a couple of finely chopped shallots in butter. Add a handful of spinach and/or watercress and wilt them for a few moments. Off the heat, add a tablespoon or so of chopped fresh herbs: parsley, chervil and tarragon are classic, but you can use whatever soft herbs you prefer. Avoid woody herbs like thyme and rosemary. Add a handful of fresh breadcrumbs and give it all a good stir. Transfer the mix to a blender and add a small glass of pastis or Pernod. Blitz to a purée, adding some melted butter to keep it soft. If you have any liquor from opening the oysters, add a tablespoon or so of that, too.

Now you're ready to put the dish together and finish it. Put a small amount of the stuffing into each shell or in the bottom of your dish. Place one oyster onto each shell and finish with a decent dollop of the stuffing. If you're using dishes rather than shells, you'll have to be creative with how you arrange them. Finally, top with a small piece of butter. Pre-heat your grill on its highest setting, then cook the oysters under it for a few minutes. Serve with a wedge of lemon and a glass (or two) of Champagne. This dish is meant to scream luxury, so there's no point in skimping on the wine.

Once you've tried cooked oysters, it's time to get to grips with opening them and eating them raw. If you're doing this, you MUST buy them fresh and keep them chilled. Open them as late as possible before eating and keep them on ice once you have done so. You can prepare your garnishes early, of course, to save time. Traditionally, raw oysters are served with buttered brown bread and sauce mignonette - finely chopped shallot and cracked black pepper in wine vinegar. Lemon and Tabasco are popular, too. Try them all and see what suits your palate. 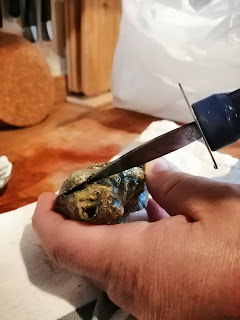 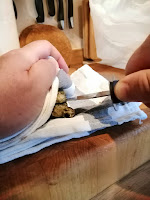 To open fresh oysters, you'll need a short, sharp knife, a cloth and a firm surface. Rinse the oysters several times to free them from any sand and debris. If any remain open once you've handled them, discard them. Now find the "hinge" of your oyster. If you look at one carefully, you'll see it has a deep shell and a flatter shell and it has a rounded end and a more pointed end. Using the cloth to protect your hand, hold the oyster down on the board and press the point of the knife into the place where the two shells meet at the pointed end. Apply steady pressure and wiggle the knife to and fro, forcing it between the shells. When the oyster's hold breaks, you can run the knife along the underside of the flat shell to cut the muscle. Gently ease the oyster to one side, to you can see where it attaches to the bottom shell and cut there, too. Your first oyster is now ready to eat. Repeat with each oyster, cleaning off any bits of broken shell with a piece of damp kitchen towel. Place them on a bed of crushed ice in whatever serving platter you're using. 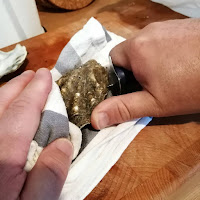 There's an awful lot of debate about what sort of wine one should serve with oysters. I've even heard it said that certain combinations will make you nauseous. In truth, you should drink with them what you will enjoy. Generally, the freshness of a chilled, raw oyster works best with dry white wines, the drier the better. Sparkling wines are classic: go for a champagne-style wine such as Cava, crémant or a New World sparkling. You might find Prosecco lacking in acidity, though, when paired with juicy, rich oysters, so save that for another day. Chablis and other unoaked chardonnay wines work very well, as do Muscadet, trebbiano d'Abruzzo and manzanilla sherry. If you want to experiment with red wine, go for a young, light one with good acidity, such as a Loire gamay or a South African pinot noir. Red or white, chill the wine before you serve it. It needs to taste fresh and lively, not calm and meditative! 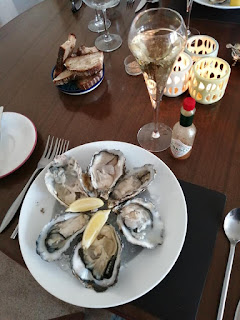